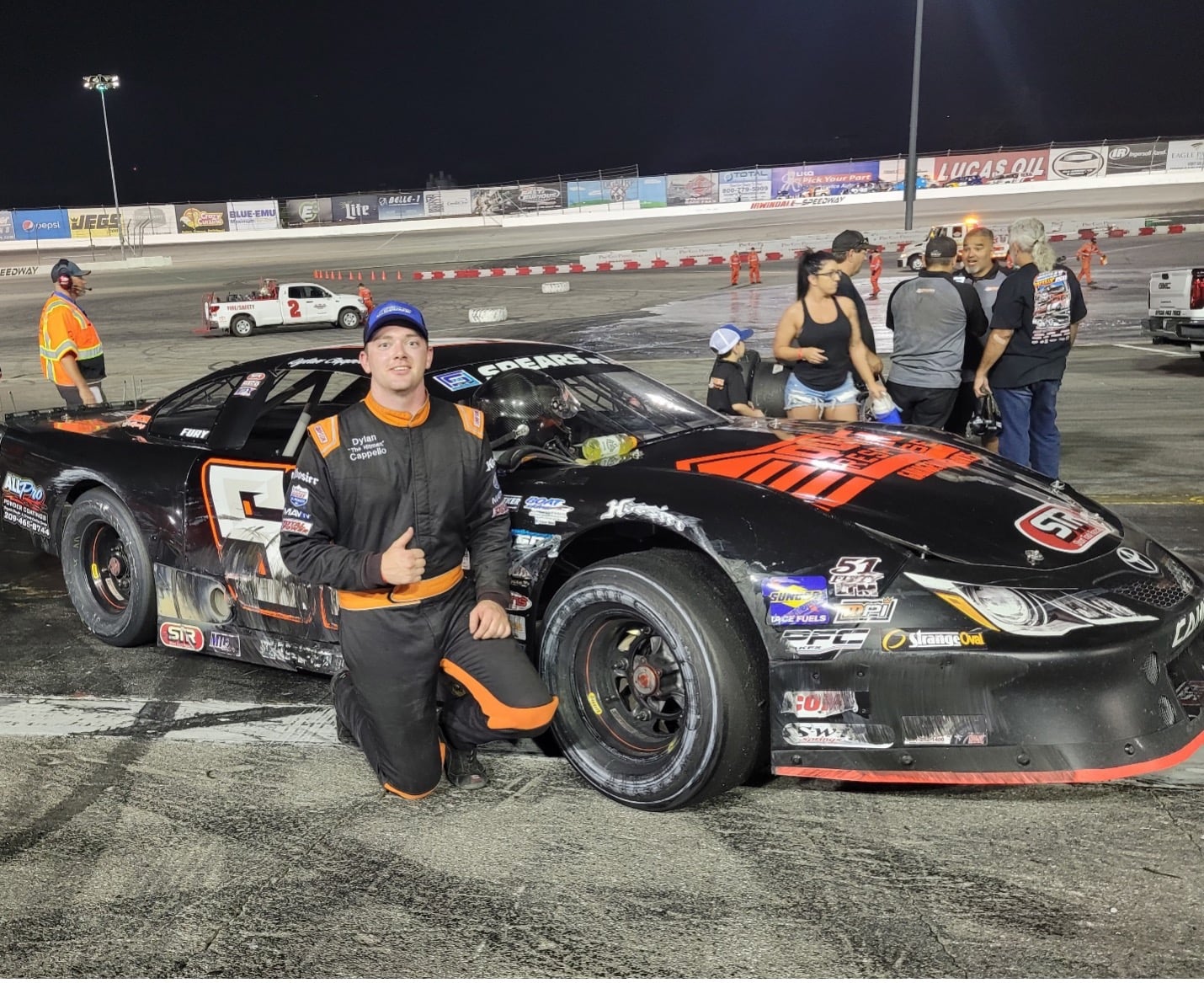 admin2021-07-20T13:51:50-07:00
By admin News 0 Comments
ShareTweet
Monroe, WA – Two-time SPEARS Modified Series Champion Dylan Cappello is fresh off a third-place finish at Irwindale Speedway last Saturday night in SPEARS SRL Southwest Tour Series competition. With the Garcia Racing Team’s success last weekend, with Cappello behind the wheel, they have decided to make the trip to Evergreen Speedway this weekend for the $25,000-to-win Summer Showdown. It will be both Cappello’s and the Garcia Racing Team’s first trip to Evergreen Speedway.
For Garcia and Cappello, it was a reuniting of forces last weekend, after their last Modified season together in 2015. The team won the SPEARS Modified Series Championship together in 2014 and last weekend’s results show they still have chemistry together, nearly beating Derek Thorn in a thrilling event. Cappello has had limited starts over the last two seasons, as he serves as a Race Engineer on the NASCAR Camping World Truck Series Team for Todd Gilliland and Front Row Motorsports. With the break in the “Truck” Series schedule, Cappello is taking advantage of having his race weekend’s off.
The “Hitman” has made three starts in the SPEARS SRL Southwest Tour Series, beginning in November of 2020. He has second and third place finishes in two of those endeavors. He has 13 career victories in the SPEARS Modified Series with two championship runner-up finishes to go along with his championships. From his results in the Super Late Model, it is apparent the transition to fender racing has been a success. After racing for $10,000 wins in the SRL, he is excited to go for $25,000 this weekend at a track he has only heard about.
“I have heard a lot of great things about the facility throughout the years, and this race has been on my bucket list to attend,” Cappello stated. “This all came together pretty last minute when talking with Mike in the pits after Irwindale. I am excited to get on track Thursday and start piecing together another fast car to contend for the win with.”
Cappello will join and over 30 Super Late Models already entered, shooting it out on July 23 – 24 for $25,000 on the big 5/8-mile oval. They will be joined by the Pro Late Models who will be competing for $15,000 themselves. Mini Stocks and Legends will be on the card Friday night, while Street Stocks, Legends and the Northwest Mini Stock Tour will complement the action on Saturday. Fans can go to the Evergreen Speedway website at https://evergreenspeedway.com/ to purchase tickets for the prestigious event.
About Garcia Racing:
Garcia Racing was founded 1998, with team owner Mike Garcia behind the wheel. Mike ended his driving career in 2008, but since then, the team has seen more than 20 different drivers participating with the team. The team ran Late Models up until 2009. From 2001-2008 the team ran races at Stockton 99 Speedway, the NASCAR Southwest Tour Series, the Shell Tri-Track Series (precursor to what is now the SRL Southwest Tour) and the defunct Westcar Late Model Series.
In 2009, Garcia Racing switched to Modifieds, winning a track championship at Stockton 99 Speedway in 2011, with driver Wes Miller. Garcia Racing scored the Lucas Oil Modified Series Championship in 2014, with driver Dylan Cappello. In 2015, they finished second in the Lucas Oil Series, with Cappello behind the wheel, as well as second in the North State Modified Series standings, with driver Tripp Gaylord. The team has won Modified races with 10 different drivers, the last being Trevor Cristiani in 2019. In late 2019, the team went back to Super Late Model Racing with Christian McGhee behind the wheel. In 2020 and 2021, McGhee and Zach Telford have split time behind the wheel. The Garcia Racing Team is based out of Lodi, CA, where they have scored over 40 wins over the years