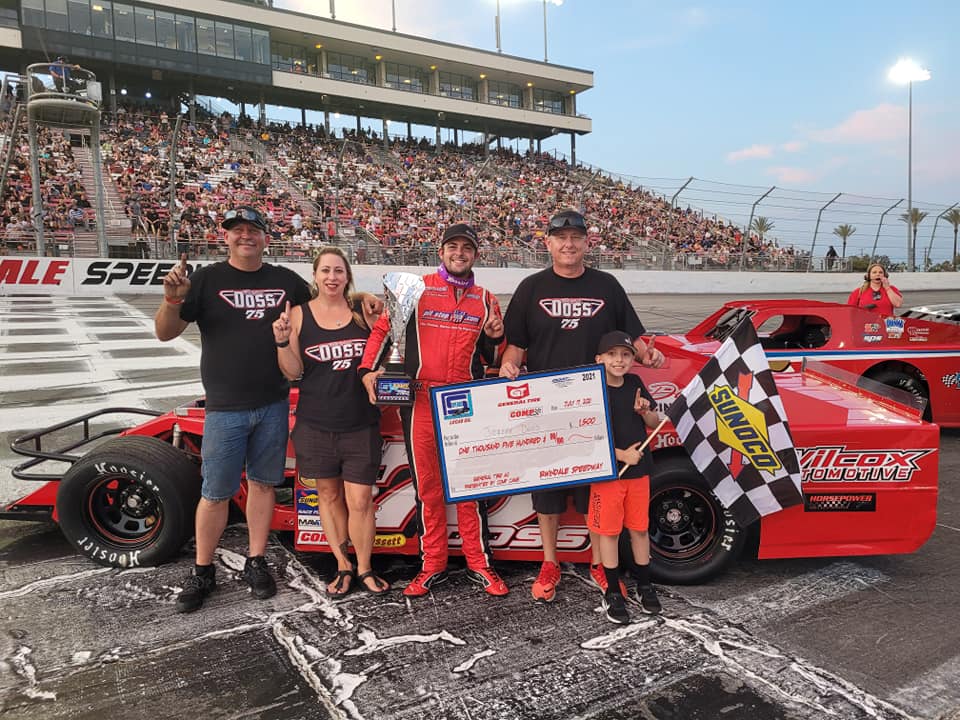 Bakersfield, CA – Jeremy Doss won a battle of the “Red Rockets” Saturday night at Irwindale Speedway, as he took home his fifth win of the season, this time at Irwindale Speedway. Doss was able to get under Travis Thirkettle on lap 37 to secure a lead he would never relinquish in the “General Tire 60 presented by COMP Cams”. The win was worth $1,500 and strengthened his hold on the championship lead in the SPEARS Modified Series, after earlier taking home a win in his Spears Pro Late Model.

Doss watched Sam Jacks score his first PFC Brakes Zero Drag Fast Time Award in qualifying with a time of 15.321 seconds on the inner 1/3-mile oval. Travis McCullough was second followed by Doss, Thirkettle and Stephen Brucker. Thirkettle drew the pole position and led the 16-car field to the green flag. Thirkettle’s red #5 got the jump over rookie Andrew Anderson at the start and moved to a quick lead. Meanwhile Doss, who started fifth, began to work his way forward, moving under Kyle Jacks on lap three. He chased down Fast Qualifier Sam Jacks on lap eight and taking third. By lap 15 Doss had moved around rookie Andy Anderson, to take the runner-up position.

Travis Mccullough was also on the move, getting by Anderson for third on lap 21. As Doss was slowly reeling in Thirkettle, McCullough was turning the fastest laps on the track, as he began closing on the leaders. By lap 33, Doss had moved to the bumper of Thirkettle, pulling off the winning pass on lap 37. As the laps ran down, McCullough tried his best to close on Thirkettle, but the two began to even out, leaving McCullough to hope for a caution. That caution came on lap 56, when rookie contenders Anderson and Sam Jacks got together to cause the only slowdown of the event.

The restart saw Doss pull to the lead in the preferred lower groove, with Thirkettle able to get to the bottom racing line for second. McCullough settled into third as Andrew Anderson showed his strength, rocketing from sixth to fourth in the final stanza. Stephen Brucker continued his strong day coming home fifth at the checkered. Eddie Secord, Sam Jacks, William Guevara, Jeff Longman and Brian Brown rounded out the top-10. 15 of 16 Modifieds saw the checkered in the clean race.

Afterward, Doss admitted that he was confident all weekend, after practicing in a car he knew could run up front.

“We had a great racecar all weekend, honestly. I just needed to do my job and be patient and let them come to me. I try to be patient and save my stuff and let them wear their stuff out. That just seems to work out. After that, this thing just doesn’t seem to fall off. Each and every race you see it really at the end of the run, because this thing is still running the same times. My spotter told me I ran my fastest lap with two to go, so that tells you something. I just want to thank Steve Teets for building a bad-fast racecar. Eddie and Cory Wilcox for giving me the opportunity to drive this car. Eddie Wilcox Jr., Keane, my dad Mike Doss, my mom Denise Doss and my spotter Alex Gomez. I’d like to thank David’s Racing Products, Pit Stop USA, Horsepower Project, and everyone who is on board with us in this program, as well as the Pro Late (Model). I couldn’t do it without them.”

“It has been a lot of fun”, Doss described. “He definitely makes me work for it each and every weekend. I have a blast doing that. It is definitely nerve wracking when he starts up front, and he is out leading, because you never know. I just need to keep racing smart and hopefully the wins keep coming.”

The Spears Modified Series will now go on their Summer break, before returning for the second time to All American Speedway in Roseville, CA. Travis McCullough was the winner the last time the series visited the 1/3-mile oval, which found Doss with his worst finish of the season, in the 17-car field.