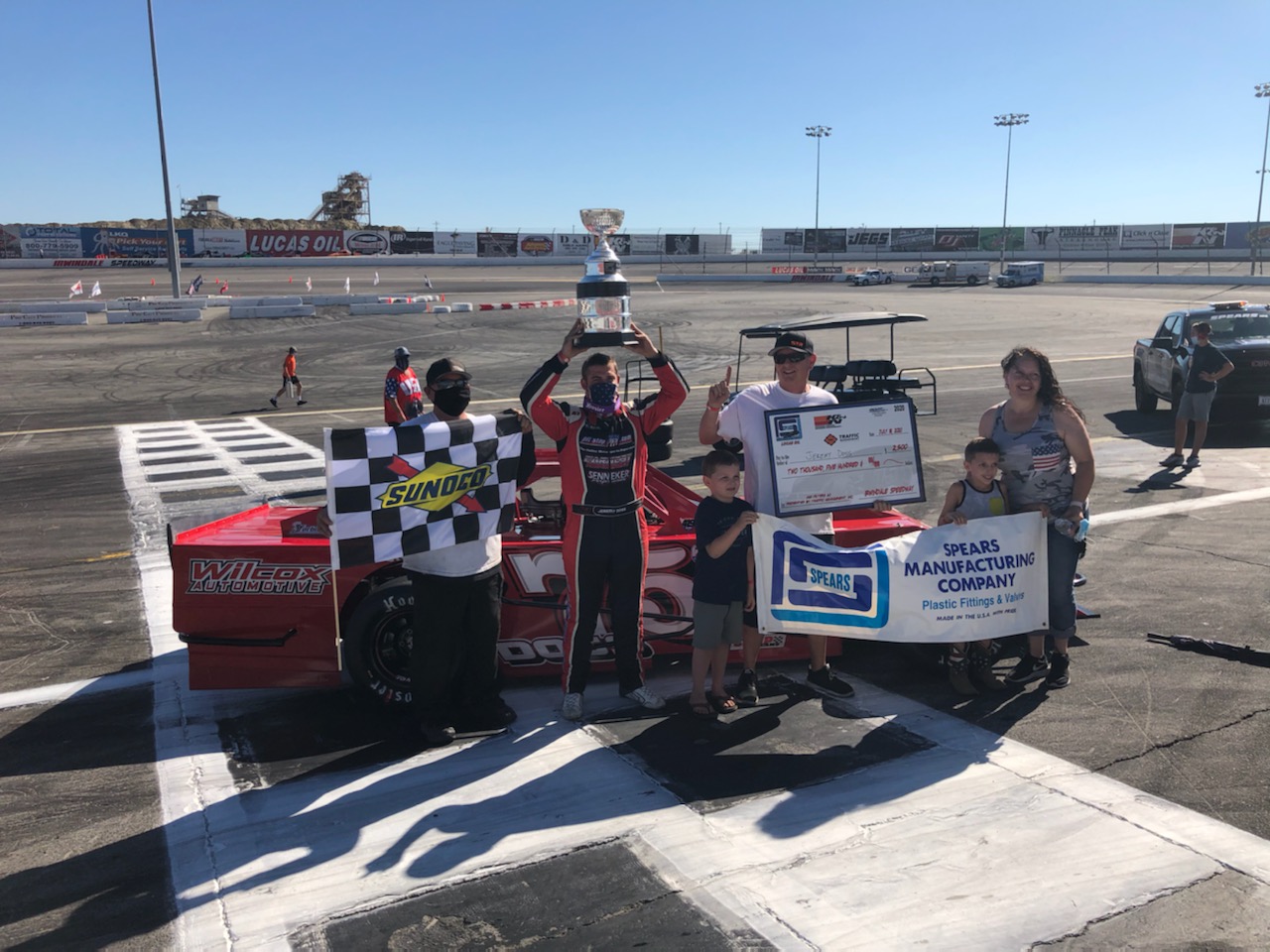 Jeremy Doss became the first multi-time winner in SPEARS Manufacturing Modified Series action in 2020, by winning the “K&N Filters 60 presented by Traffic Management Inc.” at Irwindale Speedway Saturday night.  It was Doss’ first career win at the ½-mile oval, coming before an empty grandstand in sunny Southern California. The win increases Doss’ championship lead over second place finisher Eddie Secord in Round #4 for the series.

“Man, it’s pretty special”, Doss explained in regard to his first Irwindale win! “I’ve felt like numerous times we have had a shot to win here, but always had bad luck. So finally to get the job done feels great!”

“Fast Eddie” Secord got his weekend off to a good start by living up to his nickname, setting Fast Time in Qualifying over the 15-car field. His lap of 19.105 seconds beat out Jim Mardis, Travis McCullough, Jeff Longman and William Guevara. The eight car redraw found two-time series champion Jim Mardis on the pole with Guevara, Matt Perry, Longman, McCullough, Jeremy Doss, David Levitt and Secord following.

At the drop of the green flag, Mardis took the initial lead, with Secord and Doss moving quickly towards the front. A lap five spin by Ryley Millard found Secord and Doss up to second and third following the restart. Doss would challenge Secord over the next 20 laps on the inside line, as Mardis established a comfortable lead. On lap 26 Doss was able to take second, but Secord would return the favor with a cross over move before the caution on lap 27. The restart found Doss and Secord side by side again, until Doss was finally able to secure the position of lap 32.

A lap 41 spin by Ryley Millard allowed Doss and Secord to close on the bumper of Jim Mardis for the restart. With Doss in the highline, it only took two laps before he was able to secure the lead from Mardis, and slowly pull away from his rivals. Mardis was able to put a few car lengths distance on Secord, but with 10 laps to go, Secord was applying heavy pressure to his back bumper. The duo engaged in a side by side battle over the next several laps, with Secord finally able to secure the position, with an inside run on lap 55. Doss would runout the remaining laps in front of Secord and Mardis with William Guevara winning out in a battle for fourth with Travis McCullough.

Doss was extremely pleased with the result, after the team struggled to find speed over the weekend.

“We struggled a little bit all weekend, so I tried to adjust my line where the car would work best and it seemed to work pretty well on the bottom”, Doss recalled. “It took a lot of patience and you have to be smooth and take it lap by lap. It’s hard running on the bottom when the guy on the top just keeps clearing you. It just feels good to finally get a win here.”

Doss continued, “I really would like to thank Eddie and Kori Wilcox for giving me the opportunity to drive their car, Ty Thatcher for turning the wrenches, my Crew Chief Duane Sharp, Spotter Bryan Brown and Eddie Wilcox Jr. I’d also like to give a big thanks to STR, Peters Racing Engines, Swift Springs, Pitstop USA and David’s Racing Products.”

Secord was also happy with the team’s performance, but he felt he would have had a shot at the victory if he could have gotten a late race caution.

“It was a great run, we just needed a yellow at the end to tighten it back up”, Secord stated. “My car was good on the bottom early in a run. We would have had a great shot at it if we could have gotten that yellow.”

The next event for the SPEARS Modified Series is September 19th, with a return trip to Irwindale Speedway. This time the series will tackle the 1/3-mile for a change of pace. Doss will take a slim three-point lead into the event over Secord. William Guevara and Travis McCullough will enter the event in a tie for the third position, still within range of the championship lead. Jim Coffee rounds out the top-five, while leading the Rookie-of-the-Year Standings.