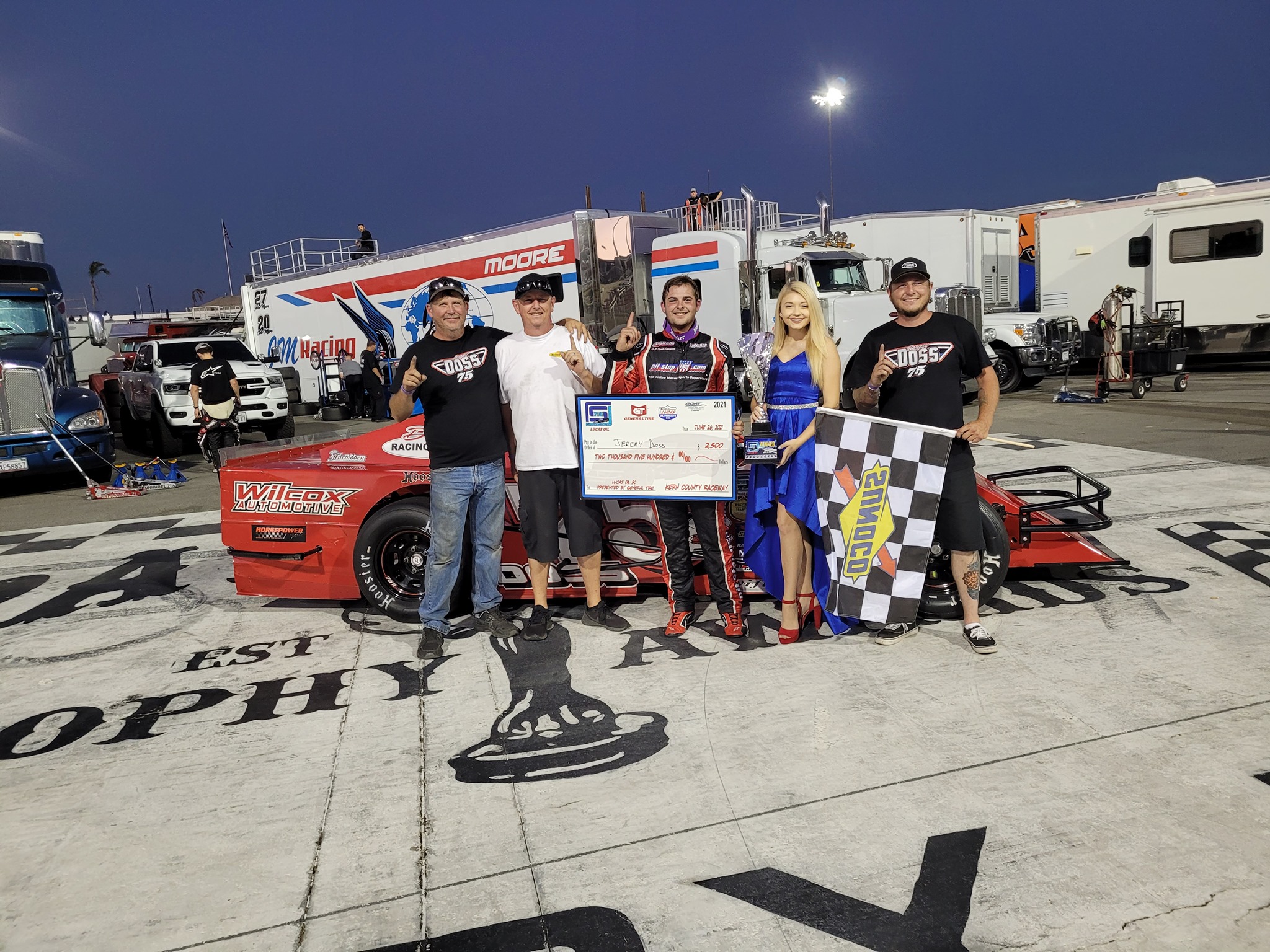 admin2021-06-28T08:43:28-07:00
By admin News 0 Comments
ShareTweet
For Immediate Release: SPEARS Modified Series Media Relations
Bakersfield, CA – Jeremy Doss put an end to Travis McCullough’s two-race win streak Saturday night at Kern County Raceway, by taking home the checkered flag first in the “Lucas Oil 50 presented by General Tire” for the SPEARS Modified Series. Doss took the lead from the start, but then had to hold off Travis Thirkettle over a series of green flag laps to secure the victory. It was the fourth win for Doss, who extended a narrow championship lead over “Fast” Eddie Secord, in a battle reminiscent of last season.
But Doss’ biggest challenger over the weekend was Travis Thirkettle. Thirkettle led Final Practice and then Qualifying over the 2020 SPEARS Modified Series Champion. He put up a spirited battle in the early going of the race, before settling for the runner-up position, as Doss recalled.
“That was a lot of fun, I’m not gonna lie to ya”, Doss admitted. “He had me a little worried there in the beginning. The car didn’t quite fire off as well as I was hoping. I started off a little loose. But as the caution came and the tires cooled down, it seemed like our car got better, and it stayed consistent. I think that is what won us the race. You could see in the long run that I was really running consistent laps, and I think that pays off.”
After three races in five weeks, 14 Modified showed for Round #6 of the season. Travis Thirkettle set the pace during qualifying, earning the Performance Friction Brakes “Zero Drag Fast Time Award” with a lap of 19.312 seconds on the ½-mile oval. Travis Mccullough went second quick with Nathan Byrd, Eddie Secord and Doss the top-five. Sam Jacks drew the lucky number one pill, but Doss drew the even luckier number two, with the outside line dominant at Kern. Thirkettle would line up third with McCullough to his outside.
The initial green flag found Doss out to the lead with Thirkettle quickly getting around Jacks for the runner-up position. He quickly began to reel in Doss and was to his back bumper by lap 6. The two began to battle side-by-side, as Doss left the inside line for Thirkettle to challenge. Thirkettle led lap 9, with Doss back to the front on laps 10 and 11. Thirkettle once again mounted a challenge grabbing the lead on lap 12, but Doss battled back to lead lap 13 and to the lap 16 caution for debris.
The restart found Doss once again lead to the lap 18 caution, for Jerry Taporek, with McCullough third and Secord advancing to fourth. Another restart found Secord taking advantage of the outside line and advancing to third over McCullough. A caution on lap 27 involving Sam Jacks and Nathan Byrd, racing for sixth, allowed the field to cool down once again. This restart, Doss was able to secure the lead, gradually pulling away from Thirkettle. Secord briefly challenged for second, but began falling back, with the extreme heat at the track playing a roll.
The remainder of the laps went caution free as Doss moved out to a comfortable lead. Thirkettle held serve with Secord while McCullough ran fourth. The man on the move was William Guevara, however, as the Havasu Speedway star moved to fifth, and began chasing down McCullough. With just a few laps left, Guevara was able to wrestle the fourth position from McCullough, in a battle reminiscent of their 2019 fight for the Rookie-of-the-Year.
In the end, however, it was Dos who took home the $2,500 check and win number four of the season. Thirkettle finished second with Secord, Guevara, and McCullough the top-five. Andrew Anderson was the top finishing rookie coming home sixth. Nathan Byrd battled back to seventh with Jim Coffey, Sam Jacks, and Ed Coffey rounding out the top-10.
After the win, Doss was thankful for the opportunity to compete in the Wilcox Automotive Modified.
“I just gotta thank Eddie and Corey Wilcox for continuing to give me the opportunity to drive that bad-fast racecar. My dad, Mike Doss, Steve Teets, Eddie Wilcox Jr., and Kaine back at home. Just everyone who is on-board; Swift Springs, Pit Stop USA, Peters Racing Engines, STR, I’m glad to pick up the win and hope to keep the momentum up.”
The next event for the series will find the Modifieds back at Irwindale Speedway on July 16th. The will be featured on the 1/3-mile with the SPEARS SRL Southwest Tour Series and the SPEARS Pro Late Model Series presented by Sigma Performance Services also present.
Finishing Order:
1. Jeremy Doss, 2. Travis Thirkettle, 3. Eddie Secord, 4. William Guevara, 5. Travis McCullough, 6. Andrew Anderson*, 7. Nathan Byrd*, 8. Jim Coffey, 9. Sam Jacks*, 10. Ed Coffey, 11. Brock Melo*, 12. Jerry Toporek, 13. Brady Melo, DNS. Mark Allen
*Rookie-of-the-Year Competitor