Dylan Cappello Doubles Up at the Bullring 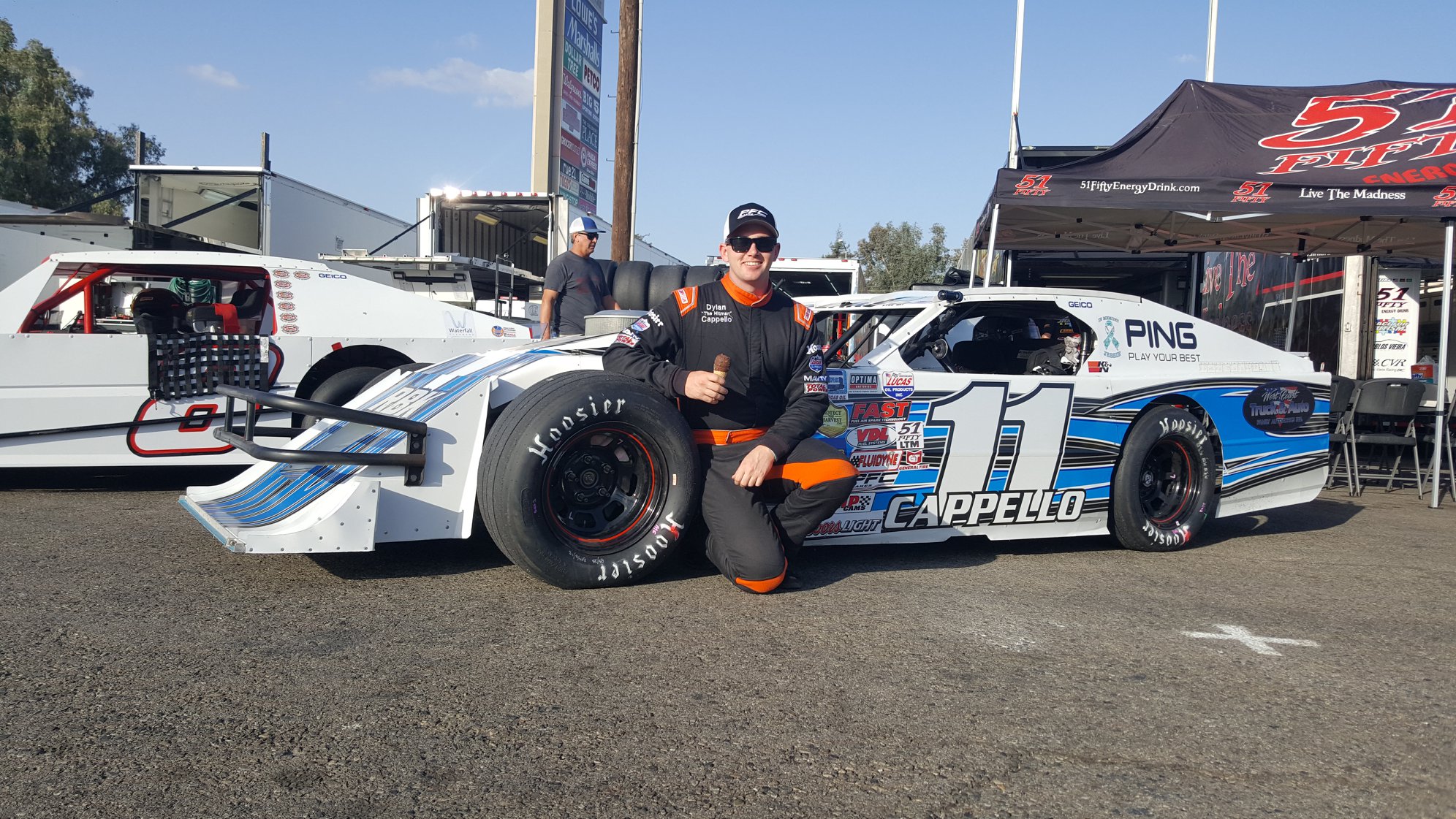 Dylan Cappello Doubles Up at the Bullring

Two-time Spears Modified Series presented by Lucas Oil Champion Dylan Cappello, is set for a big weekend on November 21st. Cappello will pull double duty in both the Spears Srl Southwest Tour Series and the SPEARS Modified Series at the LVMS Bullring and Dirt Track. Cappello will be behind the wheel of a Scott Sanchez owned Super Late Model in the Retro Custom Metals 137” as well as in the Dave Arce #5 in the “OPTIMA Batteries 75 presented by “FAST – Fuel Air Spark Technology” Modified portion of the weekend.

Cappello has one start in 2020, as he finished second in the Modified portion of the All-Star Showdown at Irwindale Speedway this past January. He was the 2019 Champion of the SPEARS Modified Series but moved away from his Peoria, AZ home to Charlotte, NC to pursue a career in NASCAR. Despite the move, Cappello had plans of returning for this race in a Super Late Model, with hopes of doing the double. Those plans will ring true when he competes in one of Scott Sanchez’s Super Late Models and a Modified owned and prepared by Dave Arce.

“I made the move to Charlotte in February and I’ve been working as a Race Engineer for the #38 Truck with Todd Gilliland”, Cappello reported. “It has been the plan all year to run Vegas in a “Tour” car and potentially run a Modified as well. I talked to a couple teams and Scott (Sanchez) showed the most interest in making it happen. The equipment is there, and it will just be up to me getting back up to speed behind the wheel. The deal with Dave Arce came about right after the Kern (County Raceway), race a couple weeks ago. He didn’t have a driver for Vegas, and we jumped on the opportunity. Jimmy Dickerson will be the crew chief, and he has a solid history of winning in the Modifieds. I think both partnerships will give me the best opportunity to win, and I can’t wait to get back behind the wheel.”

The 2015 SPEARS Modified winner of the Winter Showdown expects to be extremely competitive in both events, with high expectations for each race. Cappello has a win in the Modified Series at Vegas, as well as a win in the SRL Legends Tour in 2012. In his last six Vegas starts in the Modified, his worst finish was a sixth. But it is the Super Late Model effort, in which Cappello is looking for vindication, after finishing 25th in this same event in 2019.

“I’m most excited about getting redemption in the “Super” after my debut last year at this race”, Cappello stated. “We struggled a lot, but still managed to qualify top 10 against a solid field. This year, our expectation is to qualify in the top-five, and be there at the end, to have a shot at winning. We had an early race incident last year, so this year I’m focused on running all 137 laps.  In the Modified, we would be disappointed with anything other than a win. I think we have the whole package to go out and get up to speed very quickly.”

The “Retro Custom Metals 137” will be run on November 21st, with $10,000 going to the winner thanks to David Nava Mulcahy (Homie) and “Winner’s Bonus” sponsors Tilton Engineering and MPI – Max Papis Innovations. The SPEARS Modified Series will race for $2,500 to win in the “OPTIMA Batteries 75 presented by FAST – Fuel Air Spark Technology”. Practice will begin on Friday the 20th, with three sessions for the Modifieds, beginning at 3:00 pm (PST), with the Super Late Models at 3:45 pm (PST). Alternating sessions each will be held for each division, the last ending at 7:30 pm.

For those who can’t attend the event, catch the action live at www.SpearsRacing.TV, with your paid subscription. The event will also be shown on MAVTV and a date to be announced later.