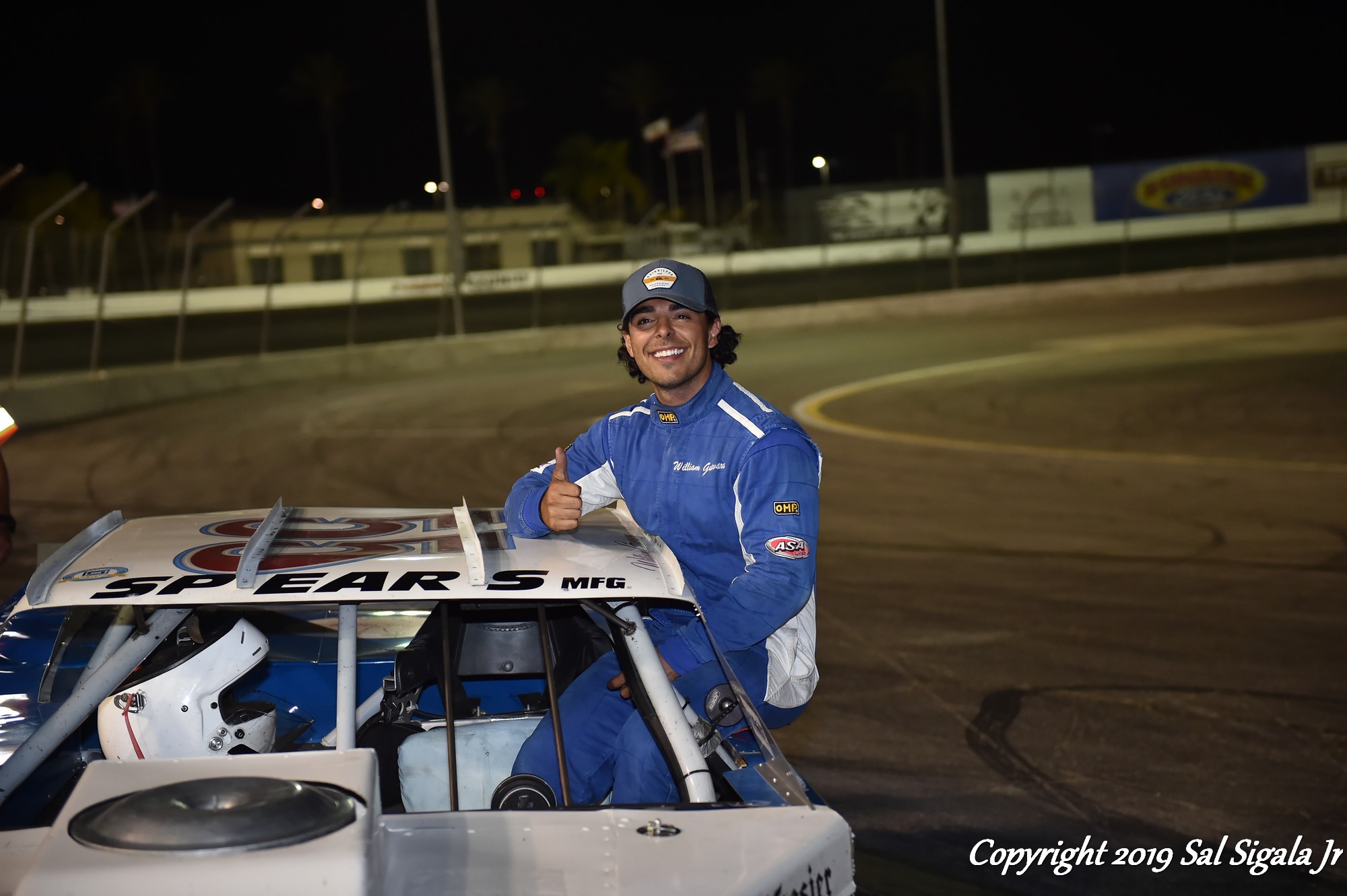 William Guevara is in his sixth season of “Spears Modified Seriespresented by Lucas Oil” competition (Formerly Lucas Oil Modifieds). Guevara is currently fifth in the championship standings, and having his best season thus far in Modified competition. The 24-year-old driver from Lake Havasu City, AZ will be looking to continue his fine season, when the series heads to Madera Speedway for the “FAST – Fuel Air Spark Technology 75 presented by General Tire”.

Guevara started racing in a Factory Stock/Bomber. He has been racing since the age of 12, never having raced in small cars. He currently races at Havasu 95 Speedway, his local track, in the Street Stock Division, in addition to his SPEARS Modified Series schedule. Will has raced in a variety of division throughout the years. Some of those divisions include the ASA Speed Trucks, Vintage Midgets, Modifieds, Street Stocks, and Factory Stocks. He has also tried a little Dirt Track Racing, but on a very limited basis.

Guevara has been a regular in the SPEARS Modified Series since race number three of the 2014 season. 2015 was his first full-year effort, finishing 24th in the championship standings. During each succeeding season, William showed improvement finishing 20th, 13th and then 13th again in 2018. His best finish during those years was a ninth at Kern County Raceway in 2017, with an additional tenth at Madera Speedway as his other top-ten through 2018.

In addition to his racing, Guevara is attending Mohave Community College, in pursuit of a business degree. He plans to finish his associate degree this Fall Semester, then look to transfer to a four-year school, such as Arizona State University, to obtain his bachelor’s degree.

Guevara will now head to Madera Speedway, his favorite track on the series. It is the site of one of his career highlights to-date, in a season that has seen a huge improvement in the budget racer’s results.

“Well it all started in the first race of this season at Madera”, Guevara told the SPEARS Modified Series. “We qualified seventh and got to start on the outside front row. We got to lead the race and we were able to race inside the top-five the whole race. At the last race we had at Irwindale (Speedway), we had our best race and we had our best finish, which was a third.”

Guevara continued, “We have a lot of confidence going to Madera, every time we go there. Madera has always been a good track for us. I really like racing there. If I could race there all the time, I would. I really like most of the track we go to now. I would race at each of them every weekend, if I could.”

As a low-budget racer, Guevara relishes the competition in the SPEARS Modified Series. He especially enjoys competing on even terms with the larger teams in the series.

“I would say the competition and trying to be competitive with the top budget teams, is my favorite part of competing in the SPEARS Modified Series.”

As the final one-third of the season begins, Guevara would like to improve upon his one top-five and three top-ten finishes to date. He would also like to give thanks to a lot of people and companies that make his racing efforts possible.

“I would like to thank my mom, dad and our helper at the track Dale”, Guevara began. “I would also like to thank my sponsors; Flowers Assisted Living, Larson Equipment, Alignment Doctor, Get It In Gear Transmissions, Babaloo Lounge and Car Quest. Other company’s/ friends that have helped me include; Sal Lopez for giving me the opportunity to get me into a Modified, Steven from STR, for doing a great job on our shocks and helping me on and off the track, Dean Kuhn, and his team, for helping us at the track, Dave Arce for a great engine, Andy for a great engine, Bill from Havasu 95 Speedway, Parker Pumper for helping us with parts on and off the track, Franks Radio Service, for always helping us with our radios and SPEARS / SRL for having events for us to race at. I’d also like to thank Spears Manufacturing for sponsoring the series as well as all the other series sponsors like Hoosier Tire West, FLUIDYNE High Performance, Sunoco Racing Fuel, Lucas Oil, OPTIMA Batteries, General Tire, Protect The Harvest GEICO, K&N Filters, MAVTV, VDL Fuel Systems, COMP Cams, Fast Fuel Air Spark and Coors Light.”