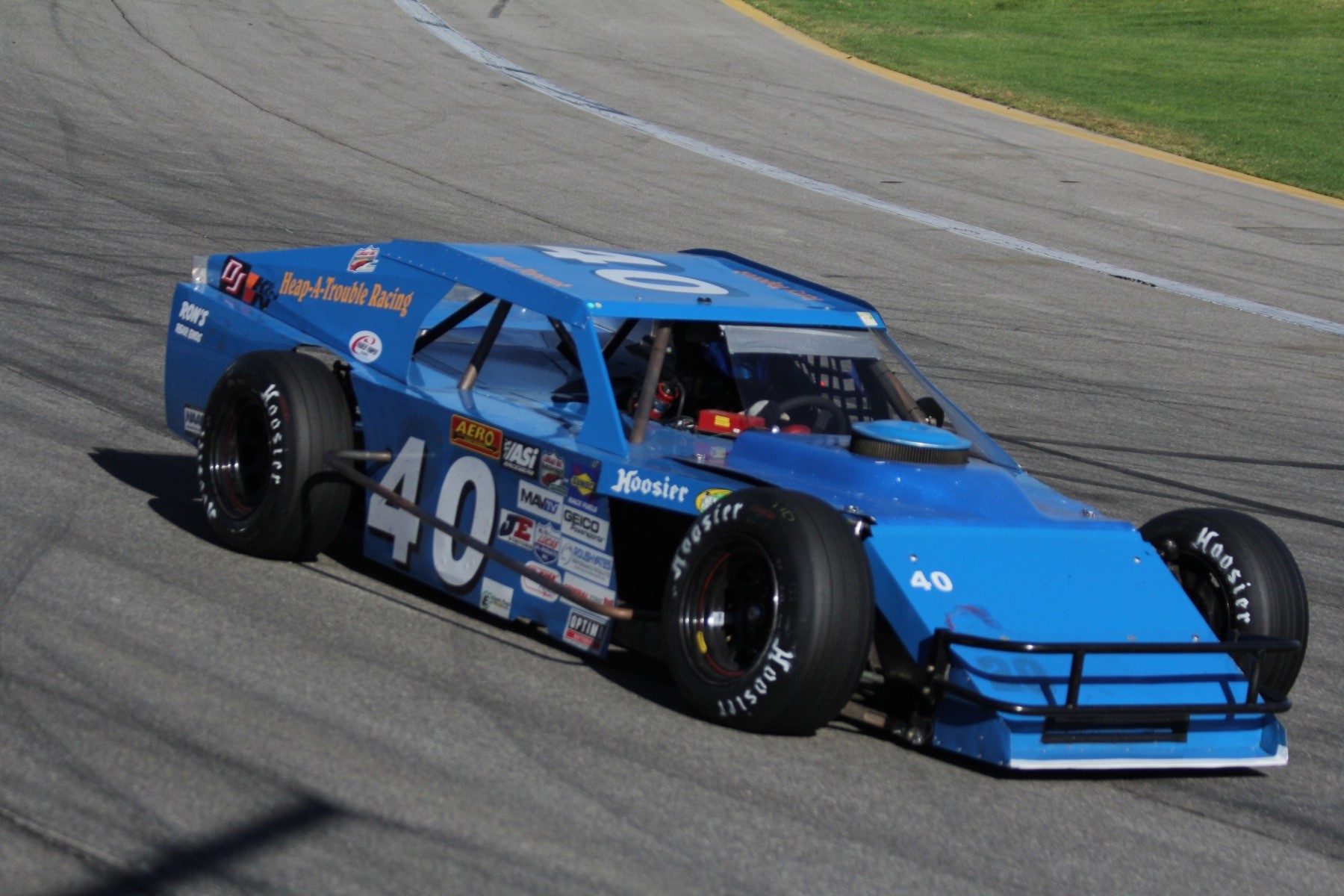 This past weekend, the Spears Modified Series sat down and talked to one of its veteran racers. Jerry Toporek may not be the first name you think of, when looking for a favorite for the “Traffic Management, Inc.. 75 presented by General Tire” at Irwindale Speedway (CA), but the driver of the Heap-A-Trouble Racing, T.G’s Performance Engines Modified is the foundation for motorsports these days. He loves being behind the wheel of a race car, as he told the SPEARS Modified Series…….., well at least once the racing begins, as he talked about what he enjoys most about race weekend.

“Speaking only about the Modified Series weekends, that’s a pretty easy question. Everything until the actual race starts is torture.  I don’t feel like I am doing a good enough job in practice. I am terrible at qualifying. But once we are racing, as long as I have some cars I can compete with, I come off the track wanting to go again…”

Toporek has had a long racing career by most standards. But the driver from Venice, CA didn’t get his start until the tinder age of 45. He has nearly 30 years of racing experience under his belt, and started his career at the now defunct Saugus Speedway (CA). His career has been like a history of Southern California race tracks, and he shared the experiences of that career with us and his fans.

“I first saw a race at Saugus Speedway in 1992”, Toporek began. “My only exposure to racing had been national television coverage of NASCAR events on big tracks. I had no idea that short tracks existed, and seeing 22 car main events on a 1/3-mile track was completely mind blowing.  Two weeks later I was on the track in my 1969 Dodge Charger, doing their Ego Challenge event, which was a single car, two lap, time trial for street cars.  I was part of the show, and I have been in the pits ever since.”

Toporek continued, “I built my first Pure Stock race car to run at Saugus (Speedway) in 1995.  It was a 1977 Dodge Monaco big block, four door, ex-CHP car.  It was ready to race two weeks after Saugus Speedway closed, but Heap-A-Trouble Racing was born.”

“It was late in the season, but I raced everywhere I could. Kern County Raceway (KCR, the quarter mile track at Willow Springs, not the current Kern County Raceway Park), Mesa Marin (CA) and Blythe Speedway (CA) were the main facilities I participated at. I raced that car for the full season at KCR in 1996, finishing second in points, and winning the post-season Shootout Event in September.”

“For 1997, I had the opportunity to acquire my dream car, though I moved up to the Street Stock Division with much trepidation.  I bought Chris Peedan’s 1970 Dodge Challenger, which he had run at Mesa Marin, Saugus, and then KCR, where he won the Street Stock Championship in 1995. The 1997 Street Stock season at KCR was a real learning experience.  We made every race and gradually improved, finally cracking the top five (in a 24-car field) in the last race of the season.  When KCR closed, in September of 1997, we immediately moved on to Orange Show Speedway (CA), racing there in the Street Stock division for a number of years.”

“At some point, with car counts dwindling, I started entering the Figure-8 races at Orange Show.  These were really great events, but the Challenger was never very well suited for turning right.  With Figure-8 more fun than the Street Stock races, I bought a 1977 Monte Carlo enduro car, which was quite happy turning both ways.  I ran that car for several years, but the level of competition, with a one-page Outlaw “rule book”, became dominated by super cars at both Orange Show and Irwindale Speedway.”

Soon after, Toporek got his first taste of the SPEARS Modified Series, formerly the Lucas Oil Modifieds, as he recalled.

“When the Monte Carlo took major damage at Irwindale, I gave away what was left of it, and bought an Irwindale Grand American Modified and turned it into an Outlaw Figure-8 car, but retained the ability to set it up for oval racing.  In 2007, at an event at Orange Show, both the Figure-8’s and the Lucas Oil Modifieds were on the schedule.  I went with the car set up for the oval track, passed tech as a Modified and made the show.  It was a great race, and I finished 12th, I believe. I then quickly exited the track.  With minutes between races, my crew changed the tires, adjusted the left side front and rear ride heights, and replaced the left upper control arm to reset the camber, and I was back on the track for the Figure-8 race, which I finished third.”

“The Modified race was a lot of fun, but joining the touring series was not yet in the cards.  I continued to race Outlaw Figure-8.  In 2009, at the Lucas Oil 200 Western World Championship at Orange Show, I scored a big payday, finishing third.  It was mostly through attrition, but we earned it.  In 2011 we ran the Modified mostly at Irwindale in the Open Comp Division, which was another one-page rule book, run-what-you-brung, kind of deal.  It was great fun with a good car count of everything from Pure Stocks to Super Lates.  Irwindale didn’t keep track of points, but NASCAR actually did, resulting in my one season championship.  And then when Irwindale Speedway didn’t open in 2012, it was on to the Lucas Oil Modified Tour full time. We ran for six seasons, “retiring” near then end of 2017.”

But as many attempts at retiring from racing are concerned, the effort didn’t take, and Toporek was back behind the wheel less than a year later.

“We sat out most of the 2018 season, but attempted a full-time comeback in 2019, in what became the Spears Manufacturing Modified Series.  That ended prematurely with a hard hit into the turn three wall on the Irwindale half mile.  Lacking good sense, and having nothing better to do, and with concussion symptoms pretty much gone, I cut the front clip off the car and rebuilt it.  We missed the first race this year, but now we are back.  Meanwhile, I continue to race the old Dodge Challenger in the Super Stock division at Irwindale, where it is outclassed by leaf spring Late Models.”

With his retirement from racing so short-lived, we asked the personal racer what motivates him to come out and compete in a SPEARS Modified Series event.

“A number of things”, he replied. “I like to race, and I have what I need to do it.  Time, equipment, crew, and a desire to help put on a show that is worth paying to watch. Also, to keep our short track racing heritage alive.  It’s hard work, but I have the time to get the work done.”

As a smaller team, Jerry doesn’t feel the Heap-A-Trouble Racing Crew lacks for much in their Modified. They compete with their current car, more out of his concern for his future retirement, rather than a lack of funds to purchase or build a new one. He feels the main essential for their success is something that his late arrival to the driving scene has limited.

“It’s true that there are teams that are a lot more ostentatious in their spending”, Toporek stated. “But if there was something we could spend money on, that would make a significant difference, we would do it, with the exception of buying a new car.  I’m always on the verge of retiring, and have tried a couple of times, so doubling down isn’t in the cards.  What we need, money can’t buy.  I started racing at the advanced age of 45, and never developed the kind of skill at identifying what the car needs that kids we’re racing against learned at an early age.”

As the series heads to Irwindale Speedway for the “Traffic Management Inc. 75 presented by General Tire”, a new set of challenges will be presented to the veteran driver. He has 10 SPEARS Modified Series starts on the ½-mile, but it will be the series first visit to the 1/3-mile. Toporek doesn’t know if that will be beneficial to him or not, but he feels like it will be more fun.

“I don’t know if it will benefit me, but I do expect to have more fun”, Toporek anticipated. “Although racing on the half-mile tracks are more glamorous, I think we put on a much more interesting show on shorter tracks.  I have actually lobbied for years, to try to get our races moved to the 1/3-mile at Irwindale.  You just can’t push and shove on the big track without wrecking cars, and that really takes a lot out of the show. I really hope we get a good turnout for this race. I have been looking forward to it for a long time…”

To get Toporek to his first long-anticipated Modified start on the 1/3-mile, there are a many people Jerry would like to thank. He is grateful for his long-time crew members, who have been loyal to him over the years.

“Well, first, foremost and almost exclusively, my loyal crew.  Our accomplishments on the “Tour” have been modest, but my guys are there with me and I really appreciate the fact that they work hard and take what we are doing seriously” I would like to thank my engine builder, T.G.’s Performance, in Gardena, CA, who has been great to us.  We get very solid motors for the Modified, and for all three of the team’s Mopar Super Stocks, and at very reasonable costs.”

Jerry would love to grab his second career top-10 in the series on September 19th. He barely missed out in the last event at Irwindale, posting an 11th. If Toporek can take advantage of the 1/3-mile oval, he just may accomplish his goal and move up in the standings from his current ninth-place position.