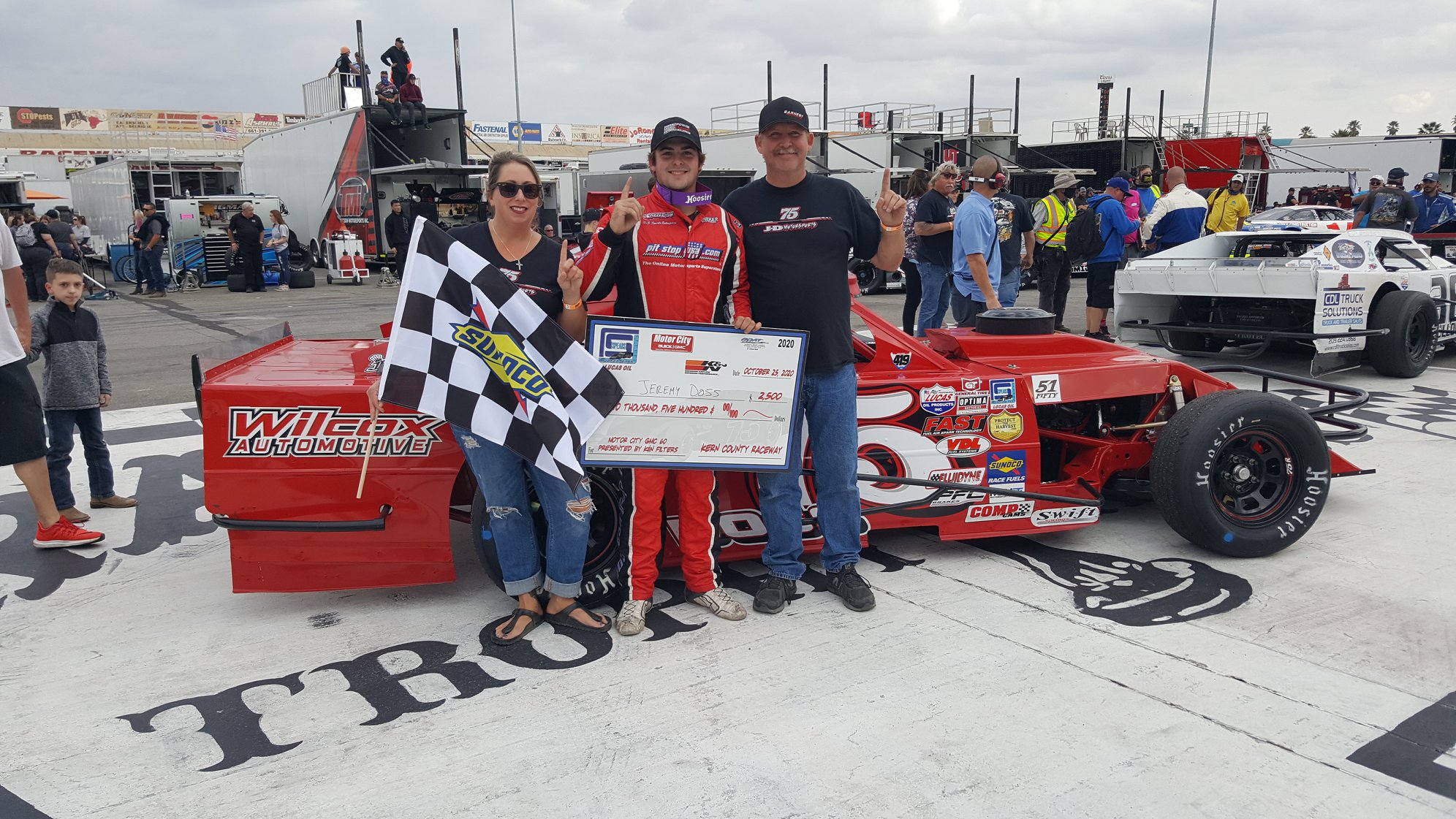 Jeremy Doss had a perfect weekend at the 31st Edition of the October Classic at Kern County Raceway. Doss was quickest in all four practice sessions for the SPEARS Modified Series, quickest in Qualifying and quickest in the “Motor City Chevrolet Buick GMC 60 presented by K&N Filters”, bringing home the $2,500 winner’s check. Doss took the lead from Travis Thirkettle, with an inside move on lap-two, and never looked back, leading the remaining laps to score the victory. The win allowed Dodd to regain the championship lead in the series, by a single point, in the hotly contested championship battle with “Fast” Eddie Secord.

Doss enjoyed a rare weekend when everything seemed to click. The driver from Upper Lake, CA drove the Eddie Wilcox owned #75 to the front in each session, scoring his third victory of the season. The 2018 SPEARS SRL Southwest Tour Series Champion knew the team was going to be good from the start. It was a sensation that Doss could really appreciate.

“There’s no feeling like making those first practice laps and knowing right away that you’ve got something special under you”, Doss described. “This was our third race at Kern (County Raceway) this year, so my crew chief Duane Sharp, has a good sized notebook on what we need to do to be fast and that was the key to having such a dominant car.”

At the drop of Noel Dawson’s green flag, Thirkettle jumped out to the lead, as Doss followed the leader under Jim Coffey for second. It didn’t take long for Doss to get under his Irwindale Speedway rival, however, and move to the lead before three laps were complete. Doss would maintain a comfortable lead as Secord took his time coming through the field, with Guevara quickly moving to third and McCullough to fourth. A few laps later, Secord moved to fifth and took up chase of the battle for third. On lap 16, McCullough was able to get by Guevara in lapped traffic with Secord following two laps later.

On lap 25, Brock Melo and Doug Carpenter got together for the first yellow of the event. On the ensuing restart, Secord was able to use the preferred top groove to grab third from McCullough, before a Chris Dalton spin on lap 26. Another restart found Doss pulling away again, with Secord hounding Thirkettle for second. After multiple laps of side by side action, Secord finally cleared Thirkettle on lap 38, with Doss nearly a straight a way out front.

Secord would see his chance of victory renewed however, when Dalton and Billy Mitchell got together, sending Mitchell into the spin cycle on lap 50. The restart saw Secord battle Doss on the low side, making contact in Turn 3, but Doss was able to motor away before the final caution on lap 52, for a spin by Dalton. The restart found Doss getting a great jump in the outside groove. Secord struggled to get up to speed, with Thirkettle rocketing by to take the runner-up position with just a few laps remaining. Secord would fight back, however, and regain the position with four laps to go.

“That last restart was a little bit of a rabbit deal with me and Jeremy”, Secord told SpearsRacing.TV. “He took off and I couldn’t go, but man it was a good comeback from fighting with Thirkettle, that was a darn good race. I just need to thank my sponsors Pinnacle Peak, Secord Motorsports, K&H, RBK, LES, and everyone that comes out with me, my crew and my family.”

Doss would go on to score the victory, with championship rival Secord in second, followed by Thirkettle. The battle for fourth was settled on the final straight, as Guevara and McCullough bounced off each other headed to the line. McCullough was sent spinning from the contact, but was able to just edge Guevara by inches at the stripe, as the two drivers also battle each other for third in the championship chase.

After the event, Doss was thankful for the opportunity to compete in the event.

“I just got to hand it off to these guys, Steve Teets who builds a bad a** race car, Duane Sharp for fine tuning it, it was really really good today”, Doss exclaimed! “I gotta thank Eddie and Cory Wilcox for giving me the opportunity to drive their car, and Eddie Wilcox Jr., Shane and everyone who has to do with this program. I can’t thank them enough.”

The win gives Doss momentum, heading to his favorite track on the SPEARS Modified Tour; the Bullring at Las Vegas Motor Speedway. It is the same track at which he made his first SPEARS Modified Series start, garnering his first series victory over a 29-car entry.

“I feel really good going into Vegas”, Doss professed. “It’s a track I’ve had a lot of success at, which I feel benefits us the most!”