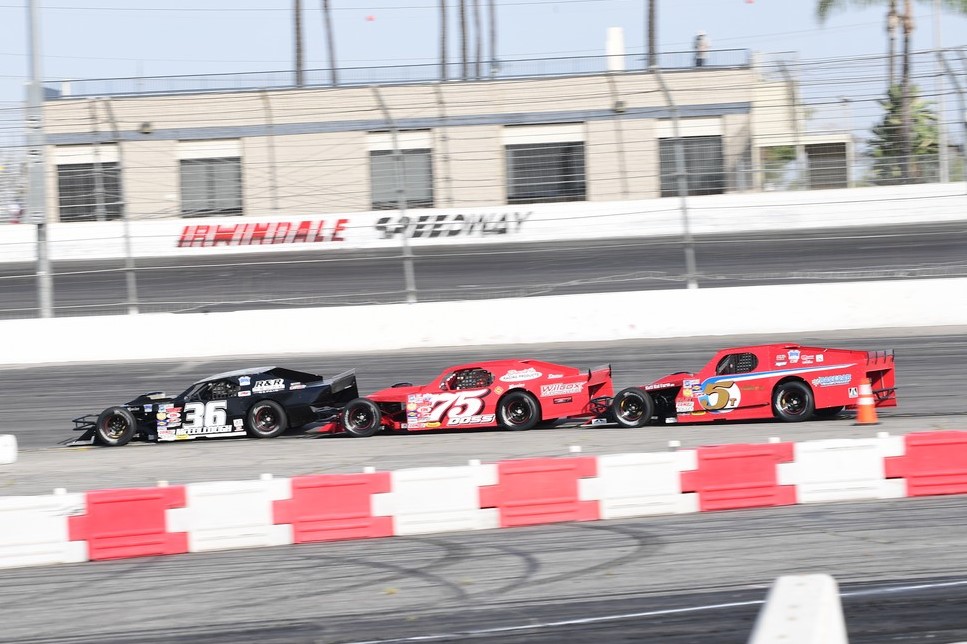 Bakersfield, CA – The SPEARS Modified Series is headed for Irwindale Speedway on June 12th for the “General Tire 60 presented by OPTIMA Batteries” . It is the third appearance at Irwindale for the series in 2021, but it will be the first visit on the big ½-mile. Jeremy Doss and Travis McCullough have split victories on the inner course this season, while Eddie Secord leads the championship standings in a case of déjà vu from the 2020 season.

Entering the series fifth event of the season, the championship standings have tightened up after championship leader Jeremy Doss had overheating issues at All American Speedway, dropping him from the championship lead. Doss had scored victories in the first two events of the season, but a runner-up finish to McCullough at Irwindale and a 15th -place finish at Roseville, knocked Doss from the top spot. Doss’ Modified record on the ½-mile shows a win and a third-place effort, both in 2020. He will look to get back to the top spot in the series, a feat he was required to achieve several times last season, in a back-and-forth duel with Secord for the championship.

“I feel like we are in a great position”, Doss told the SPEARS Modified Series, regarding winning the championship. “We’ve had a great car all year, but a couple little problems took us out of lead. But I think we will be able to regroup this weekend at Irwindale, hopefully taking back over the points lead. The last time we were on the ½-mile in the Mod, we picked up the win so I’m hoping to do the same this weekend.”

Secord finds himself in the championship lead after four series events. Secord had a battle down to the wire for the championship in 2020, before finally settling for second in the standings behind Doss. This season there is a new point system for the Modifieds, which mimics the system in place for the SPEARS SRL Southwest Tour Series Super Late Models. Secord will look for his consistency behind the wheel to pay off at the end of the day.

“I think the new points layout will award a more consistent year”, Secord explained. “You can’t have a bad race, or you will get set back a lot more. We look at it as if we can just finish top 1-5, have those other teams have one more bad race, and we can make a run at the Championship. Last year I made one bad racing deal, in a race that cost us a shot at the Championship in 2020. I don’t want to make that mistake again.”

That consistency has led to a 655 to 648 lead in the championship standings. Travis McCullough sits third with 639 points with Travis Thirkettle just behind with 625 points. Secord’s season got off to a slow start, but he has now recovered, thanks to some changes made to the car, which returned it to last season’s setup.

“The year started off slow for me”, Secord admitted. “We just didn’t have the speed we had the year before. We tried some new setups, but they just didn’t work. So, before Roseville we went back to what we had been running last year and BAM, the car was back, and the speed was there.”

“The teams involved in this tight battle are all awesome teams” Secord stated. “I just need to out-run them this weekend. The Irwindale ½-mile hasn’t been a track I race well at. I have had some good finishes, second beginning the best. I think we can make a run at the win this weekend, we just need to beat three other cars and the rest of the field.”

Secord continued, “It should be a great race on the ½-mile, which is a little change from the small tracks. But we have two and a row on ½-miles, with Kern (County Raceway) begin my better track. I just need to thank my sponsors; Pinnacle Peak Steak House, Keller Racing Engines, Secord Motorsports, LES, KH Enterprises, Naake Suspension, Total Power, Swift Springs, and Team RBK.

After winning the Rookie-of-the Year title in 2019, Travis McCullough continued to improve behind the wheel of a Modified in 2020, finishing third in the standings with seven top-five finishes in eight starts. In 2021, the improvement has continued, as he won his first series race on the 1/3-mile at Irwindale. He followed it up with a victory at All American Speedway and has placed himself in the center of the championship battle. His lone setback was a DNF at Kern County Raceway’s Winter Showdown, finishing 18th. He will now return to the half-mile at Irwindale, a proposition he is looking forward to.

“I’m excited to get back onto a large track again and get a great finish this weekend”, McCullough stated. “This team has never gave up after a very bad weekend at KCRP.  I feel very confident on this weekend’s ½-mile track, to finish well.”

Much of that confidence come from his recent success in the series and the momentum it has generated, which has continued to build from his first victory.

“The momentum the first win gave us was huge, and the last win at All American Speedway was bigger”, McCullough explained. “I’m glad to get a couple of wins in for this awesome team, because they deserve it.  The two wins back-to-back has changed our outlook on the rest of the season, to get us back in the hunt. We will just work hard to keep moving forward and closing the gap.”

On the ½-mile at Irwindale, however, McCullough has only managed a best finish of 10th in three career starts. Despite that fact, McCullough still loves the Irwindale big track, and he will have his eye on beating the other three of 2021’s “Big Four”.

“My first race in these cars was at Irwindale’s ½-mile and I enjoyed it”, McCullough recalled. “It is still my favorite ½-mile track.  I’m hoping to get a great finish, as we have struggled to be in the top-three on certain races.  I know of three tough guys to beat at this race this weekend and it will be Jeremy Doss, Travis Thirkettle and Eddie Secord.  These three drivers are very talented, and I’m honored to run against them at these races.”

McCullough is grateful for the team and sponsors behind his current winning streak.

Sitting fourth in the standings is Irwindale Speedway standout Travis Thirkettle. Thirkettle stood to leave All American Speedway with the championship lead, but a last lap spin, while battling for the victory, left the Canyon Country, CA driver with a disappointing 11th-place finish. He will be one of the favorites this weekend at his home track, where he won the 2020 season opener on the ½-mile. With a repeat victory, the championship battle will close even further.

Secord, Doss, McCullough, and Thirkettle will be challenged by top rookies Sam Jacks, Andrew Anderson and Kyle Jacks as well as former champion Jim Mardis and veteran racers such as Jimmy Sloan and William Guevara.

The “General Tire 60 presented by OPTIMA Batteries” will roll off on Saturday June 12th and will pay $2,500 to the winner. The Modifieds will be joined by NASCAR Late Models, INEX Legends, Truck Tire Enduros, Street Stocks, Mini Stocks, YouRaceLA Spec Racers, and the BMR Drivers Academy. Admission Gate open at 5:00 pm with Main events scheduled to roll off at 7:00 pm. The SPEARS Modified Series will lead off the Main Event schedule.