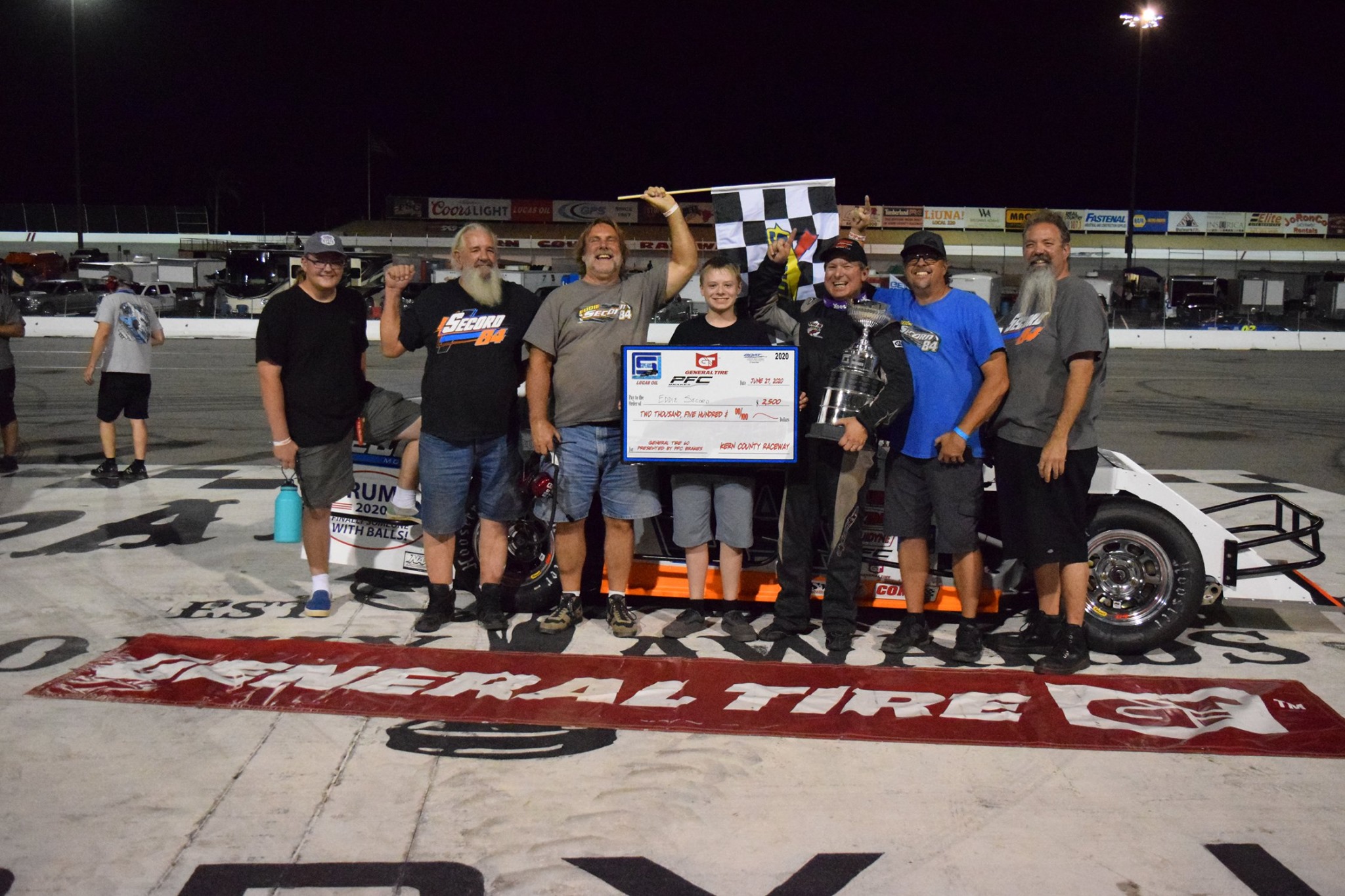 “Fast” Eddie Secord used a mid-race pass of Travis Mccullough, to take the lead in the Spears Modified Series event. He never looked back, in taking his first career series victory at Kern County Raceway. The “General Tire 60 presented by Performance Friction Brakes” win was worth $2,500 to the Hesperia, CA driver, as he had to hold off championship leader, and 2018 Spears Srl Southwest Tour Series Champion Jeremy Doss.

“It was just awesome to finally get my first Spears Modified win”, Secord exclaimed! “Kern hasn’t been my best track, but we have this car working awesome anywhere we go right now.”

McCullough would get off to a fast start and lead the first half of the event ahead of Dalton. Doss and Secord battled back and forth for the number five spot, while chasing Guevara. A restart for a Brock Melo spin found Jim Coffee shuffled back with Secord eventually slipping past Doss with lapped traffic in the mix. It was a pass that ended up deciding the feature.

“Getting by Doss at halfway was no easy task”, Secord recalled. “My car was so strong off Turn 4, I knew if I could get under him there I could clear him getting into 1. He raced me clean. He’s one of the best short track drivers around.”

Secord would chase down Guevara and make an inside pass, followed a few laps later by Doss. Secord would close on McCullough and take the lead just past the halfway mark, as Doss would follow once again.

The final restart saw Doss starting alongside Secord, but Secord was able to fend off the Upper lake, CA driver’s cross over move in turn four and slowly pull away for the one second victory. McCullough was able to hold off a charge from Guevara for third as Chris Dalton bested Austin Stewart for fifth with Jim Coffee, David Levitt, Eric Burst and Brady Melo rounding out the top-10.

In Victory Lane, Secord was thankful for those who helped him make it happen.

Doss was dominant in the first SPEARS Modified race of the season at Kern, and felt they were just as good this weekend, if it hadn’t been for throttle issues.

“I felt we were just as good this weekend but the throttle started sticking in the Main, which is never good especially at Kern, so I just had to settle for second”, Doss recalled. “I think we would have had something for him if we could of gotten into the corner without the throttle sticking.”

Despite the second place effort, Doss had a strong weekend and was thankful for the efforts of his team.

“I would like to thank Eddie & Kori Wilcox for letting me drive their car, my crew chief Duane Sharp and the rest of the Crew; Ty Thatcher & Eddie Wilcox Jr. I would also like to thank STR, Peters Racing Engines, Swift Springs, David’s Racing Products, and Pit Stop USA.”

The next event for the SPEARS Modified Series is at Irwindale Speedway on July 18th. Travis Thirkettle won the season opening All-Star Showdown event at the facility, after a thrilling battle with Jeremy Doss.