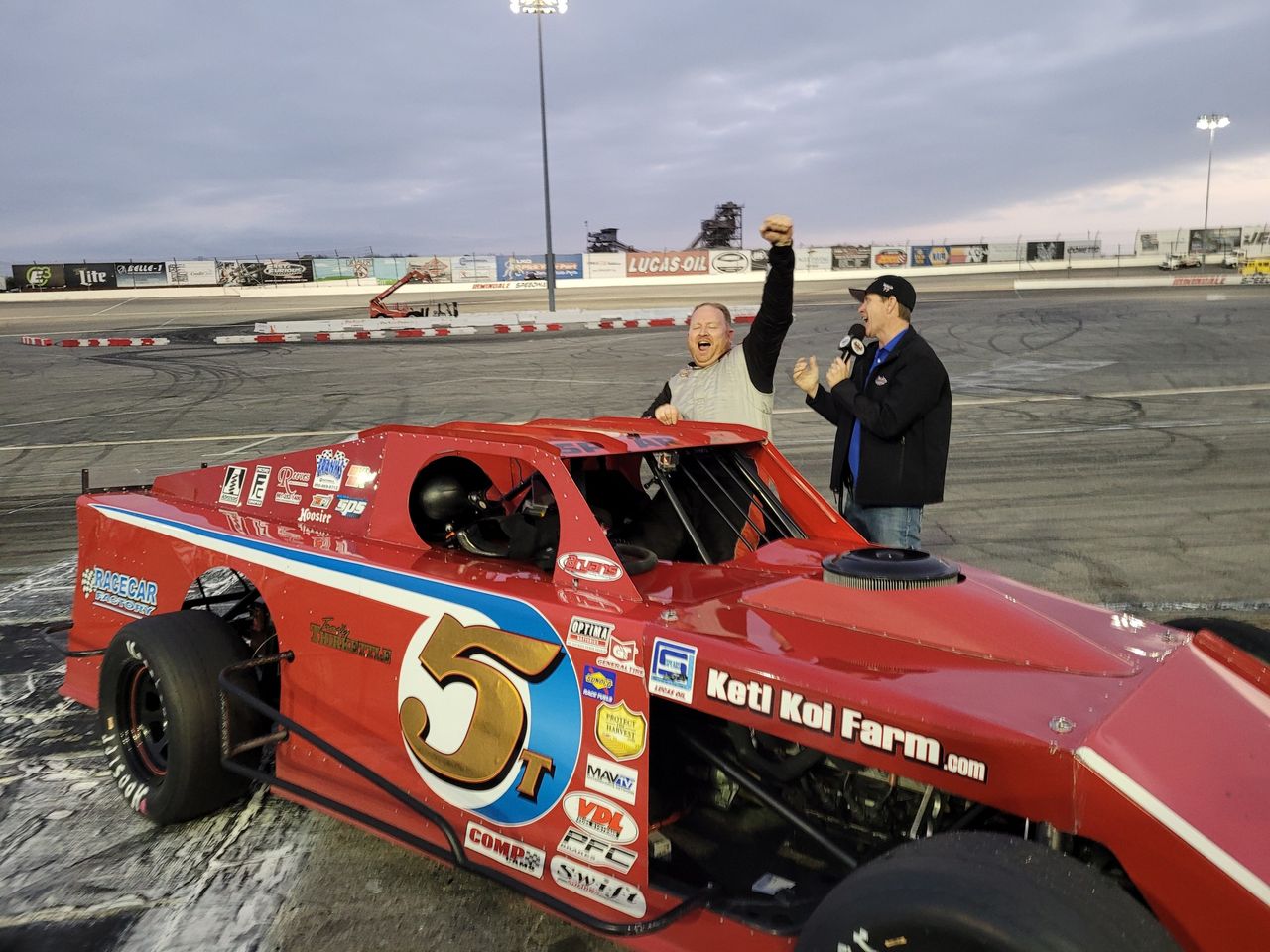 The Thirkettle name is synonymous for winning at the ½-mile Irwindale Speedway (CA) facility, located at 500 Speedway Drive. But surprisingly, Travis Thirkettle has never won on the inner 1/3-mile oval, after celebrating numerous victories on the fast ½-mile. That streak came to an end Saturday night, as the Canyon Country, CA driver drove to the front of the field on lap 18, and never looked back to score his third Spears Modified Series win of the year in the “Comp Cams 60 presented by Optima Batteries”. Thirkettle, who is sponsored by Race Car Factory, and Ketl Koi Farms, earned his sixth series triumph, but first on a track of less than ½-mile.

“Can you take the monkey off my back now”, Thirkettle inquired? “I’m no longer half-mile Jack! We have been working really hard on our short track program. Jeremy Doss pushed us really hard last year, and I think we could have won a few on this track, but he was just a little bit better. I don’t think he could have held us off tonight. This car was just on rails. It could go anywhere. Point it straight and it could turn better than any car I’ve ever driven before. It was awesome, what a race.”

The green flag flew and Sloan and Vossen battled side-by-side for several laps, before Sloan cleared Vossen for the lead. Thirkettle started seventh, but was making outside passes advancing through the field. By lap five, Thirkettle moved around Clark for fifth and advanced around a fading Vossen on lap seven. Thirkettle continued his outside run clearing Kyle Jacks and then Longman a lap later. From there he took up the chase of Sloan, who had build a comfortable lead.

By Lap 10, Sloan led Thirkettle, Kyle Jacks, Longman and championship leader Giannini, who had started eighth. By lap 15, Thirkettle had moved to the back bumper of Sloan and began pressuring the Indio, CA driver. On lap 18, Thirkettle made his move, getting under his opponent and clearing him for the lead. Giannini continued his charge, dispatching Kyle Jacks and Longman to get to third on lap 20. On lap 30 the caution came out for RJ Smotherman, who had charged from 10th to sixth, as he was unable to resume action.

The caution came out again on lap 33 as Donna Gunther and Vossen tangled on the backstretch to slow the action for the final time. This restart found Giannini jumping under Sloan to grab the runner-up position as the field went clean and green the remaining 27 laps. Longman held steady in fourth as Clark moved into the top-five. The final laps saw William Guevara and Sam Jacks exchanging sixth back and forth, as Thirkettle cruised to the $1,500 victory. Jacks was finally able to secure the position with Stephen Brucker, Kyle Jacks, and Kevin Vossen completing the top-10.

The victory for Thirkettle will keep him sixth in the championship standings, but will close the gap on Guevara for fifth, only two marks back. Kyle Jacks sits only 12 points ahead of Guevara. The next event for the Spears Modified Series will be at Kern County Raceway Park on June 18. It will be Round #6 of the nine-event schedule.