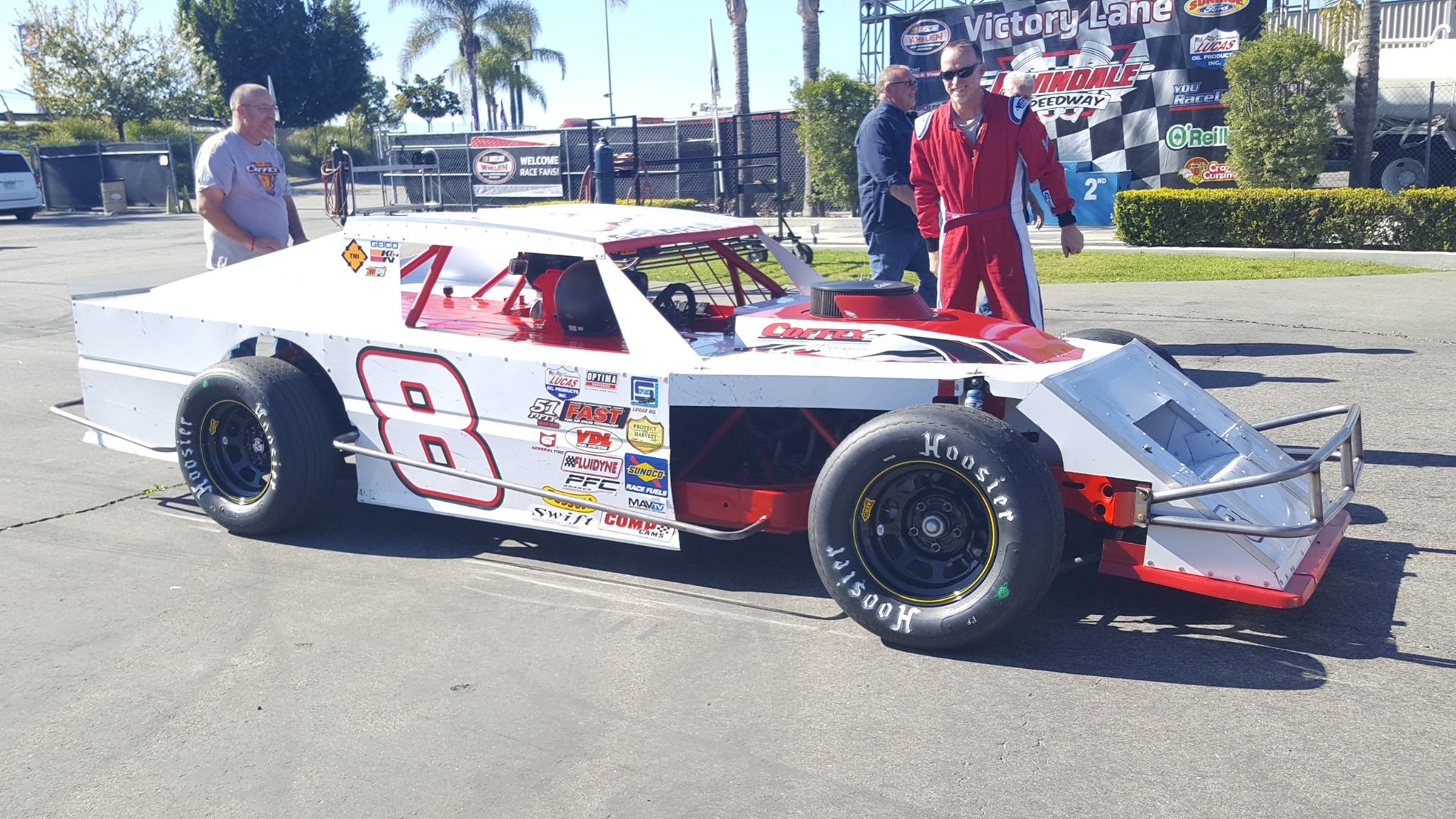 Jim Coffey is a three-time track champion in the 602 Spec Modifieds at Kern County Raceway. But in 2020, he and his brother Ed Coffey are taking on a new challenge, as they run for Rookie-of-the-Year honors in the Spears Modified Series presented by Lucas Oil. Their next challenge will be the 1/3-third mile at Irwindale Speedway, a first for the series and a first for the brothers. The “Traffic Management, Inc. 75 presented by General Tire” will take place on September 19th and will be Round #5 of seven on the season’s schedule.

Jim currently sits fifth in the championship standings and leads the Rookie-of-the-Year quest over his brother Ed, who is sixth overall. Despite their rivalry for the honor, they work together as a team to improve both their programs, even though they remain competitors on the track. They both use each other’s differing strengths on race day, to make the best result at each event.

“My brother and I definitely help each other in the pits and away from the track”, Jim indicated. “We both have full-time jobs and a lot of other family commitments, so we typically do about 90% of the work on our cars by ourselves, in the evenings, or on weekends at our home shops. That said, we always help each other out if we can.  We also always pit together on race weekends, whether it is at KCRP (Kern County Raceway Park) or the Spears Series, since we usually only bring a couple of friends and/or family as crew members and we share a lot of resources.  Ed is a great mechanic so, if there are any mechanical issues on either car, he is usually the one that can diagnose and fix the problem.  I tend to focus more on the chassis & setup, so if the cars have handling issues, I’m usually trying to figure out how to fix that.  We share all the tools, parts, and information to try and make sure we are as successful as possible as a team.”

But on the track, that relationship changes. Jim says they race with each other respectfully, but he will race his brother hard, after all, bragging rights are on the line.

“On the track we race each other just as hard, or harder than anyone else, but we do it respectfully”, Jim stated. “I have complete trust that my brother is going to race me clean and hard at all times, so I have zero problem rubbing tires with him at any track we go to.  Plus, our on-track battles make for some great stories, and lead to a lot of friendly teasing when the family is together.”

With three consecutive championships at Kern County Raceway, Coffey knows how to win a title. He currently leads the 2020 championship standings as well, over his brother Ed, in the NASCAR Modifieds. The driver from Bakersfield, CA has won two of three events this season, after dominating and winning seven of nine features in 2019.

“I’ve obviously had a lot of success at Kern in the 602 Spec Modified class, and much of that has to do with how cost effective that class is”, Coffey relayed. “We’re honestly a very low-budget race team so the crate motor, spec shocks, tire & gear rules, etc., are what allow us to race competitively in that series.  Plus, the big fast track really fits my driving style. I also only live 12 miles away from KCRP, so I have practically no travel expenses for race weekends and it’s very affordable for us”.

But to compete for a championship in the SPEARS Modified Series, Coffey knows he would need additional resources to make a run at the title. He feels the team would need the additional practice time at the tracks and some additional help with setup.

“For our team to think about competing for a championship in the Spears Modified Series it would take two things”, Coffee ventured. First, we would need marketing partners to increase our team budget to a level where we could afford the additional expenses related to Friday travel for practice and testing at all tracks. Also, the tires & fuel used in the added practice and testing. We would need top-notch shock/suspension & motor packages, and enough spares to fix any problems we encounter.”

Coffey continued, “Secondly we need a good crew chief to help us with setup for the various tracks that the Series visits.  I’m somewhat competent at setting the cars up for big, banked tracks with conventional suspension and the spec shock package, but I know absolutely nothing about running asphalt cars on bump stops or special shock packages or setting the cars up for smaller tracks.”

Coffey concluded, “Ideally, if we could put the right sponsorship deals together, we would be talking to some of the bigger more experienced teams about teaming up with them to go after a championship.  That is something that I’m interested in exploring in the future.

The SPEARS Modified Series will now head to one of those smaller tracks that Coffey has concerns about, when it comes to setup. He feels the motor disadvantage may be somewhat minimized, but his experience at tracks like Irwindale’s 1/3-mile will make running well more difficult. But nonetheless, he is looking forward to gaining experience at the smaller tracks.

“I have more than 4,000 laps of experience and 23 wins on 1/2-mile tracks (between Kern and Irwindale) in the 602 Spec Modified class, but I have less than 150 laps of experience and no top-10 finishes on tracks smaller than that”, Coffey explained. “So, going into the 1/3-mile at Irwindale, I feel like we’re at a big disadvantage.  I think the smaller tracks will take away some of the advantage, that the more powerful open motors have over our 602 engine, but I really have no idea how to get our car to turn good on the smaller tracks.  I’m talking to as many people as I can to get some setup advice and we’re planning on attending the Friday practice sessions, to see if we can figure it out.  With that said, I’m really looking forward to racing Irwindale, Havasu, and Vegas so I can get some more short-track experience.”

Given his unfamiliarity with the 1/3-mile at Irwindale, and the shorter tracks in general, Coffey is just looking to run all the laps, get a solid finish and gain valuable knowledge about setup on the smaller tracks.

“My goals for Irwindale are to hopefully learn more about setting the car up for smaller tracks and to come away with a top-10 finish”, Coffey said. “We’re not at a level where we can compete for wins in this series yet, so if we can get a top-10, and load the car up in one piece at the end of the night, that will be a success.”

Coffey has chosen to participate with the SPEARS Modified Series, and the Modified division in general, because of his love for open wheel racing. He has been a fan of those types of race cars since he was young, and he enjoys some of the additional challenges that those cars offer. He feels the Modifieds are just fun to drive, as he stated.

“Some of my favorite things about the Modifieds are their unique look and the open wheels. Growing up, my favorite race cars were the Super Modifieds, Sprint Cars, and Indy Cars. I was never a big stock car fan, so for me, the Modifieds look like “real” race cars.  I feel like the open wheels also add another dimension to racing these cars, since you have to be very careful when racing in close quarters.  They are light weight, low to the ground, and can be very “twitchy” which makes them a ton of fun to drive.  The teams and competitors are great also!”

Although the Coffey brothers are a low-budget team, they still have a ton of support around them from friends, family, and sponsors. For all the help Jim receives he is very grateful, as he couldn’t do it without their support.