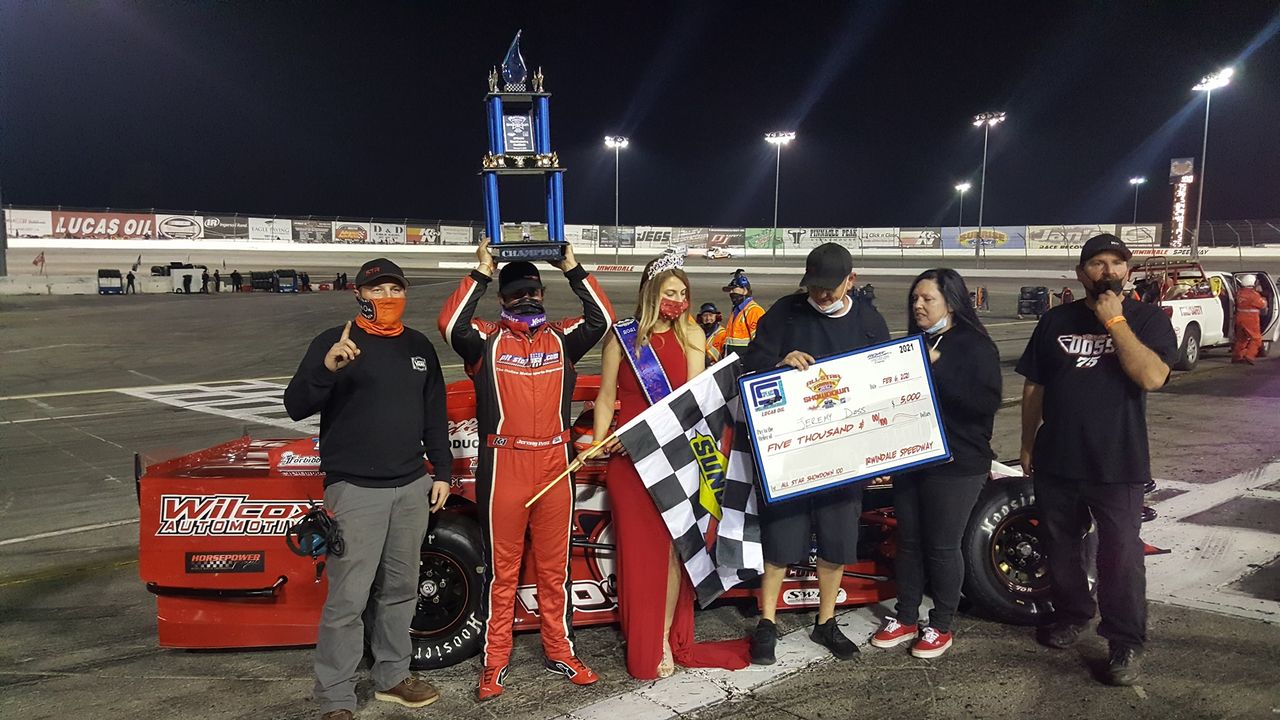 Irwindale, CA; 2018 SPEARS SRL Southwest Tour, and 2020 SPEARS Modified Series Champion Jeremy Doss had a big weekend at Irwindale Speedway, taking two of the three events on Sunrise Ford All-Star Showdown Weekend and over $20,000. Doss attempted to win all three events on the docket Saturday night, and was well on his way after winning the “Modified All-Star Showdown 100” and the “Pro Late Model 150”. He came up short in the Super Late Model, after experiencing a suspension issues during the SPEARS SRL Southwest Tour Series Event, but it was sweet redemption for the Upper Lake, CA driver, after heart-breaking losses in these two events in 2020.

Doss started the day off on the right foot by earning the PFC Brakes Zero Drag Fast Time Award in the SPEARS Modified Division. He followed that up with quick time in the SPEARS Pro Late Model Series presented by Sigma Performance Services. Both efforts were on the inner 1/3-mile oval. In the Modifieds he led a field of 23 competitors, while in the Pro late Model, 38 cars appeared with 34 taking time.

The Pro Late Models were the first Feature Event on the docket for All-Star Showdown weekend. A straight-up start, after Qualifying, put Doss on the pole. He was flanked by second quick qualifier Tyler Reif. Doss got a good start at the green, but Reif fought back, leading lap number one. A spin by Mike Weimann slowed the action on lap 2, but when the green emerged, Reif once again jumped to the lead. It didn’t take Doss long, however, to slip under Reif for the lead on lap 7, a lead he would never relinquish.

Despite Doss’ stranglehold on the number one position, the action behind the leader was furious. The four-car battle for fifth boiled over on lap 13, when Mike Lovell spun, while trying to get under Tanner Reif for sixth, resulting in caution #2. The restart saw Doss out to the lead again with Reif second. But by lap 22 Cole Williams was able to get by Reif for the second spot, with Kyle Meyer following two laps later. Stockton 99 Speedway Champion Bubba Nascimento was the next to pounce on Reif, getting by the one-time leader, then taking third from Meyer on lap 32 from his 13th starting position. Nascimento continued his strong run chasing down Williams and passing him on lap 39.

In the meantime, multi-time SPEARS Modified Series Champion Austin Barnes was making his way through the field, breaking into the top-five just after lap 40. He dispatched of Meyer a few laps later and rolled past Indiana Pro Late Model star Cole Williams on lap 60, to chase the top-two. His chance to close on the duo came on lap 69, when Mike Weimann went around for the second time. The resulting yellow caused the officials to declare the halfway break, and teams were allowed seven minutes to work on their cars with no tire changes.

After the long green flag run, only nine cars found themselves on the lead lap headed to the restart. On the restart, Doss battled with Nascimento for the lead, from the outside line, finally clearing him two laps later. Williams used the same outside line to clear Barnes for third, with Nascimento giving Doss a run for his money stalking his rear bumper. It only took Barnes a couple of laps the retake the third spot, with Kyle Meyer also going by the suddenly fading Williams. Tyler Reif dropped Williams out of the top-five on lap 83, before a caution on lap 94 slowed the action for a stalled Austin Herzog.

The ensuing restart found Doss out front, but Austin Barnes was on the move again, clearing Nascimento for second on lap 95. The two 2013 Rookie-of-the-Year candidates, in the SPEARS SRL Southwest Tour Series, were now set to battle it out for the win. As the teams reached the lap-100-mark, Doss led Barns, Nascimento, Tyler Reif, Meyer, Last Chance Qualifier winner Jaden Walbridge, Dylan Zampa, Williams, Parker Malone and Mike Lovell, who made up the last of the lead lap cars.

The final caution flew on lap 112 when Mike Lovell got into the back of Tyler Herzog, causing him to spin. Tanner Reif was the innocent victim, and piled into Herzog who slid up into the Turn 1 wall. Reif was eliminated in the accident. The final restart saw Doss back to the lead with Tyler Reif getting by Nascimento for third, with Dylan Zampa also working his way to fourth on lap 118. Two laps later however, Nascimento went back by Zampa, with Meyer following, to push Zampa outside the top-five. Lap 126 saw the final change in the top-five as Zampa recovered to get under Meyer for fifth as Doss sailed off to the $15,000 victory.

After the event, Doss was excited to start the 2021 season off on a great note.

“It always feels great to win a big race with a huge purse, especially after being so close last year it felt really really good. I’m glad to start off the 2021 season in the right direction!”

A similar story was written for the SPEARS Modified Series Event, which followed the Pro Late Model Feature. With a straight up start, Doss lined up on the inside of row one, with Travis McCullough to his outside. Eddie Secord lined up third followed by Andrew Anderson, Jason Giannini, Kyle Latham, Sam Jacks and Travis Thirkettle. As in the Pro Late Model event, Travis McCullough jumped to the lead ahead of Doss, as the 2020 champion was left to fend off an outside run by Andrew Anderson. As Doss settled into second, and Anderson into third, Travis Thirkettle was making quick work of the top-10 vaulting into the top-five by lap six. Eddie Secord also began to assert his muscle getting under Anderson for third three laps later. Thirkettle disposed of Anderson a lap later, with the top four combatants now looking like the 2020 season battles.

A Jerry Toporek spin on lap 14 would give Doss the opportunity he was looking for, as he retook the top spot on the restart from the inside. Another yellow for Jeff Longman and Nathan Bird followed with Bird towed to the pits. The third restart of the night had Doss in the outside line, holding off McCullough. Thirkettle took advantage of the upper groove and moved by Secord for third, also challenging McCullough before dropping in line. Lap 23 saw Secord back up to third as the field ran to the lap 31 yellow for Jerry Toporek and Holly Clark. Another yellow slowed the action on lap 35, this time for #13 of Noah Morris.

The lap 35 restart only saw five more laps click off, but it was Thirkettle who was the winner of the segment moving from fourth to second in the outside groove by lap 38. The field then settled into a nice rhythm once going back to green.  Doss led Thirkettle and Secord, as he used the outside restart to dispatch of McCullough. But McCullough wasn’t through, however, racing back past Secord on lap 51 and taking up chase of Thirkettle. He supplanted Thirkettle on lap 65 as Secord also closed on the now third-place driver. The caution flew once more for a stalled William Guevara on lap 70, with Dylan Caldwell now in the top-five.

The final restart found Secord getting around Thirkettle in the outside groove, but Thirkettle fought back, returning the favor on lap 73, as the veteran racers waged a war for third, as they also challenged McCullough for second. In the end, Doss was able to pull away and secure the $5,000 victory, with McCullough second followed by Thirkettle, Secord, Sam Jacks, Dylan Caldwell, Ed Coffey, Kyle Latham, Jeremy Kay and Jaron Giannini rounding out the top-10.

As expected, the win felt great for Doss, after last year’s disappointing third place finish. The 2019 Kulwicki Driver Development Champion is locked and loaded to defend his 2020 championship and the $5,000 win was a great way to get the season started.

“Winning in the Modified felt great! After last year’s race it was some sort of redemption for me”, Doss admitted. “We are setting out to try for a second championship, so we are off to a good start!”

Doss competed his weekend with a 33rd-place finish in the Super Late Model, after suspension issues ended his day early. Although the final event was a disappointment, the weekend was a great experience and winning $20,000 for his work in the Modified and Pro late Model was well worth it.

“Running all three classes was definitely a lot of work, but a great experience”, Doss recalled. “I really feel for my crew working between three cars. I’m just glad I was the guy getting to drive them! I just made sure to stay hydrated throughout the week and to have a positive mindset which seemed to pay off.”