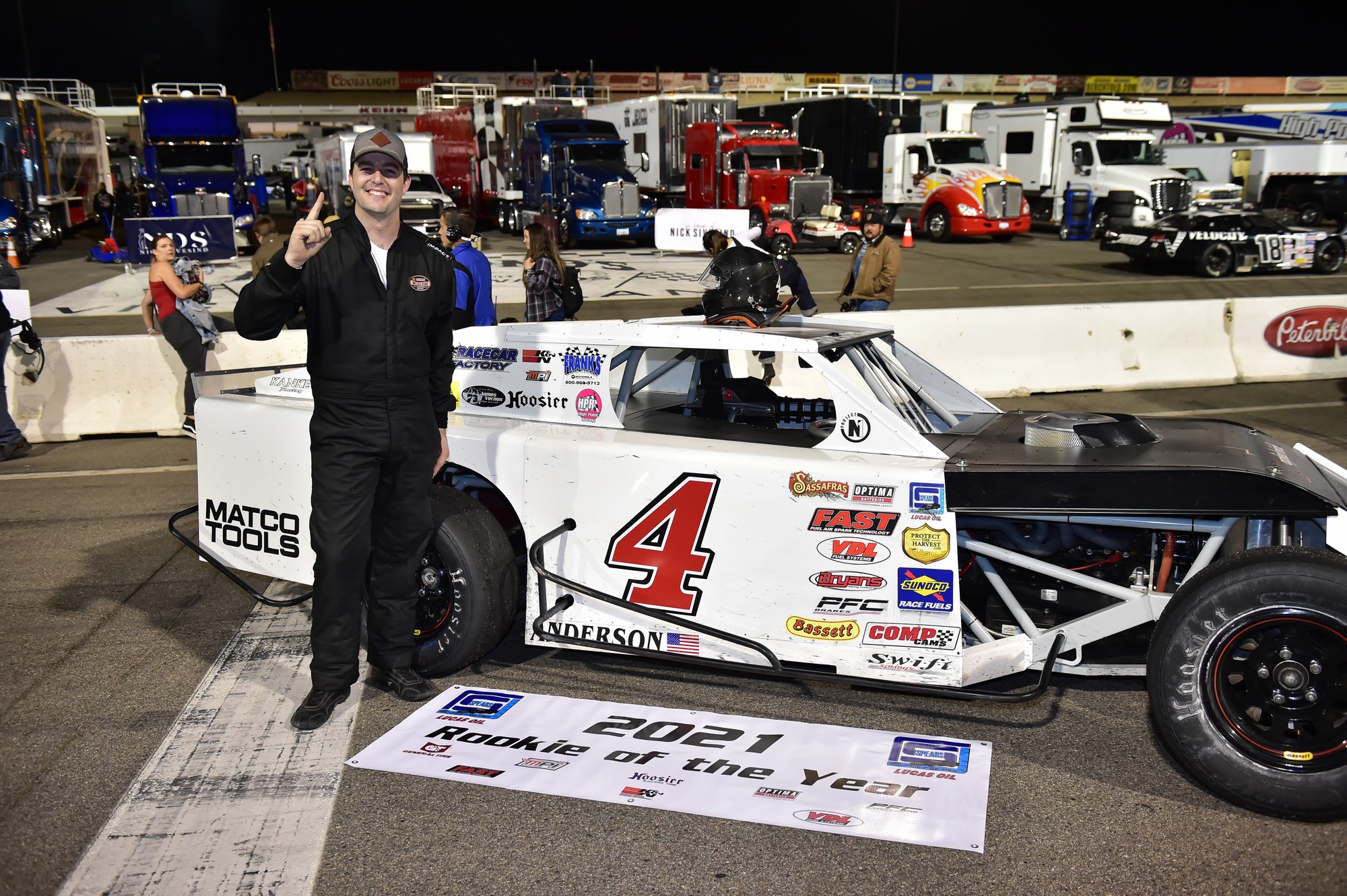 admin2021-11-12T09:26:06-07:00
By admin News 0 Comments
ShareTweet
Bakersfield, CA – Congratulations to Andrew Anderson for earning the Rookie-of-the-Year (ROTY) Award in the Spears Modified Series. Anderson battled back from an early deficit, to fellow rookie Sam Jacks, to take the lead at the two-thirds mark of the season, holding off the Las Vegas, NV driver in a battle that went down to the final lap of the season. Anderson finished with a slim 24-point advantage at the conclusion of the “Visit Bakersfield 60 presented by FAST – Fuel Air Spark Technology” October Classic feature event at Kern County Raceway Park. A lead that would have been wiped out by finishing just six positions lower.
2021 was a return to racing year for Anderson and his team. He had been out of racing for 10 years, and he took a few events to get back in the groove. Anderson started the season at the All-Star Showdown, at his home track, Irwindale Speedway. The team finished 19th in their return, but failed to finish outside the top-10 the remainder of the season. Anderson subsequently rolled into Kern County Raceway, and brought home a seventh in his first start there. Returning to the Irwindale 1/3-mile, he scored another seventh. The team then headed to Roseville, CA and ALL AMERICAN SPEEDWAY – ROSEVILLE CA. There he scored his first top-five finish, coming home in the number five position. Moving to the Irwindale’s ½-mile for the first time of the season, Anderson battled to a come from behind fourth-place finish, to continue his progression up the championship standings. The series then moved back to Kern County Raceway Park where the rookie finished sixth.
In Round #7, Anderson finally ascended to the top of the rookie standings, finishing fourth at Irwindale. He travelled north again to Roseville, knocking off a sixth-place finish, while Jacks finished 11th. The finale found Anderson driving a smart race to finish one position behind Jacks in the number five hole, claiming the rookie title.
Beyond the season opener, Anderson used consistency to secure the rookie title, finishing between fourth and seventh in the remaining eight events. The Mission Hills, CA driver was happy to bookend a championship 10 years ago with a Rookie-of-the-Year (ROTY) Award in 2021.
Winning ROTY for our team is such a great accomplishment”, Anderson stated. “It reassured us that we can pick up where we left off (2011 champion in S2 at Irwindale). We set out this season to just start racing again as family like we did years ago. Next thing we knew, we were locked in a tight battle for ROTY with some great drivers. We have people on our team from two different states and even countries coming together, to give us the best chance to succeed each race.”
Anderson was thankful for those who encouraged him to get back behind the wheel and for those who supported him in that return.
“We have so many people behind our team that just want to see us succeed, and I just hope we made them proud”, Anderson said. “I don’t think I can ever express enough gratitude to my girlfriend, spotter and family for pushing me to build this car and get back on the track. And again, thank you to all of our sponsors and supporters for doing what they can week in and week out.”
The next event for the SPEARS Modified Series and Andrew Anderson is the Sunrise Ford All-Star Showdown from Irwindale Speedway on February 12th. 22 Modifieds appeared in 2021, and another great event is expected in 2022.