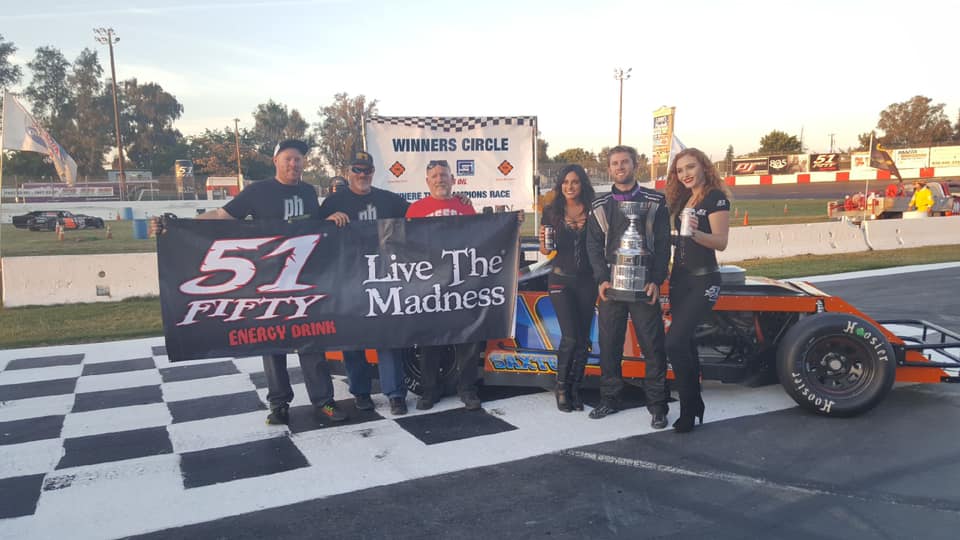 Out of state drivers Jeff Longman of Lehi, UT and William Guevara of Lake Havasu, AZ led the field to the green flag.  After a spin by Travis McCullough slowed the initial start, things got underway with Guevara leading the way.  Fast-time qualifier Hunter Corbitt of Sacramento spun for a yellow on lap three.  Saxton used the caution to take the lead on lap four from Guevara.

McCullough’s misfortune continued when he crashed hard into the front stretch wall to end his night. His teammate Eric Nascimento, Jr. pitted multiple times for repairs to right side damage as well.  When the racing resumed, Longman fell backwards to outside the top-five.  11th starting Ryan Schartau, the most recent winner on May 4th at Las Vegas, drove into fourth by lap 12.  Tenth starting Cody Kay of Reno, NV was up to fifth as well.

Eddie Second started his attempts to get around former series champion Dylan Cappello of Peoria, AZ for second.  Meanwhile Las Vegas’ Kyle Keller retired with mechanical issues on lap 28.  A multi-car incident slowed the action when Corbitt tagged 18 year-old recent High School graduate Jeremy Kay in turn two, with Kay spinning to collect both Nascimento and Doug Carpenter. Carpenter was done for the evening as a result of the damage.

Cappello looked inside Saxton on the restart before taking the lead on lap 44 after some sliding and contact.  Saxton grabbed it back on lap 45 and they remained side-by-side for the next three laps before Saxton was solidly ahead.  Secord ran all over Schartau for third behind them.

Secord finally managed to get past Schartau on lap 65, but couldn’t close down on the leaders.  Saxton took the comfortable lead ahead of Cappello, Second, Corbitt, and Schartau. Schartau and Cappello will be locked in a near dead-heat for the points lead when the series heads to its next race at Kern County.

The supporting Hobby Stocks race was a satisfying one for Steve Schermerhorn as the 2018 champion stamped his authority on the pack by lapping the entire field.  Schermerhorn was the only driver to complete all 30 laps while another recent High School graduate Manny Gonzales, Jr. defeated Dean Gould, driving a Late Model truck, for the second position.