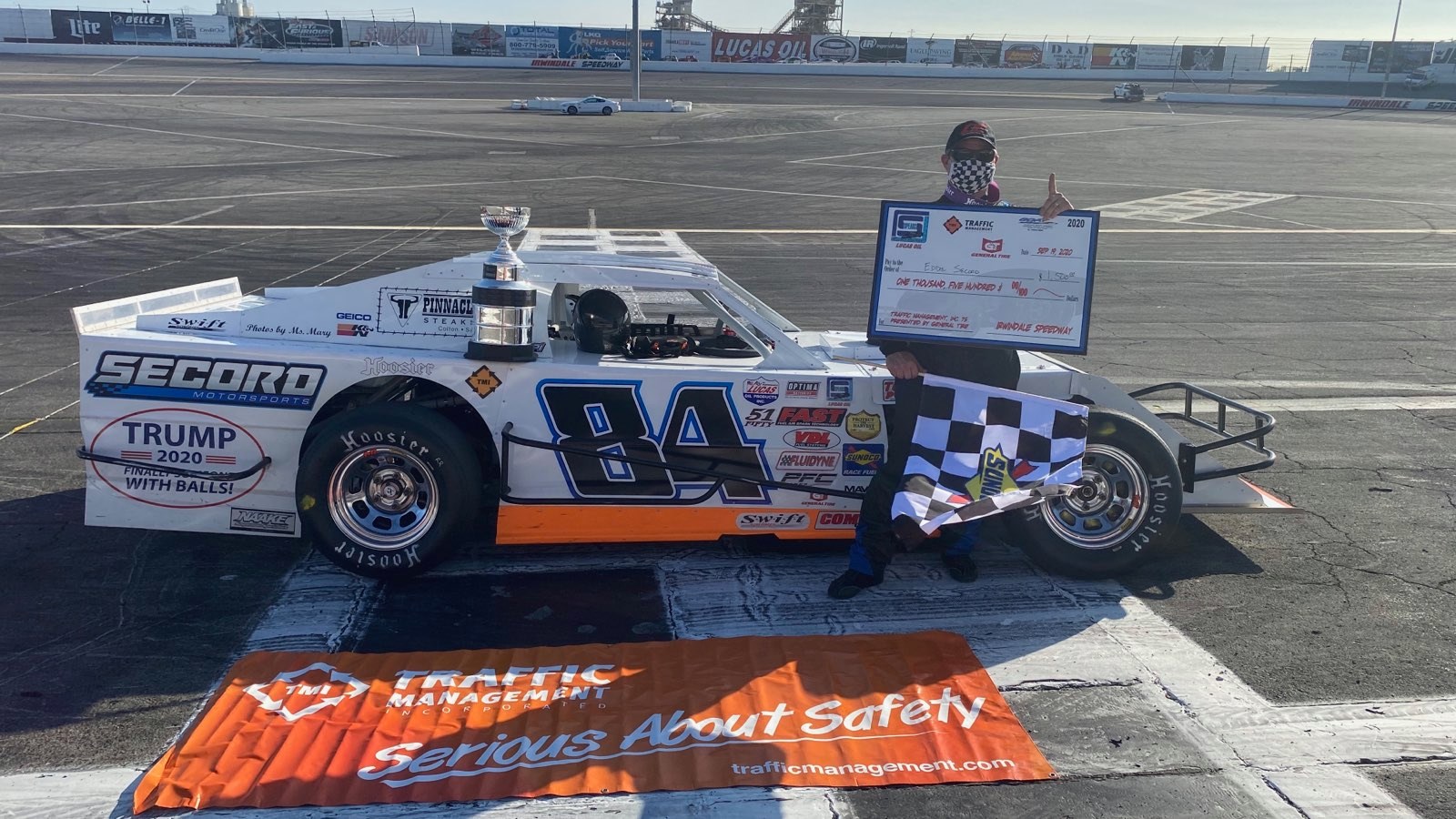 Eddie Secord came into the “Traffic Management, Inc. 75 presented by General Tire” trialing Jeremy Doss by three points in the championship standings for the Spears Modified Series. When the checkers fell, “Fast Eddie” scored his second career series victory and vaulted to the top of the championship standings. It was a dominant performance on Irwindale Speedway’s inner 1/3-mile oval. It was the first time for the series on the facility’s shorter track.

When the green flew, McCullough pulled out to the lead over Thirkettle in the preferred inner grove. By lap five, Secord had worked his way under Thirkettle for second, with Doss following a few laps later. Through a couple of cautions, it only took Secord a few more laps to grab the lead from McCullough with Doss advancing with the same inside move. Doss would chase Secord, but the Hesperia, CA driver pulled away slowly. There were several cautions throughout the race with Thirkettle battling past McCullough on the outside near the one-third mark. McCullough would battle back to take third and then get under Doss for second. Doss and McCullough would trade the second spot four times before Doss finally secured the position.

The final yellow flew on lap 57, giving Doss one last chance to take the lead. Secord was able to fend off his efforts, however, to score his second career SPEARS Modified Series victory and the second of 2020. The five-time Pro-4 Late Model champion will now take a four-point lead into the next event at Kern County Raceway and the October Classic.

“To come in this weekend three points back, and do everything I could to get max points, and come out the points leader is a awesome deal”, Secord stated. “This Championship is going to come down to the last race. My team works hard to get we’re we are at, so we will just keep doing this at ever race.”

Although Secord dominated the event, he didn’t feel comfortable about the win until the race was over. With multiple restarts, with Doss on the outside, Secord had to fight for the top spot each and every time.

“The restarts we’re tough”, Secord recalled. “I know if I could keep him out there, I could beat him of the corner. A couple of times he held tight with me and I couldn’t get away quick, I just had to drive it in little deeper to pull off the pass. I wasn’t comfortable until the checkered came out. My car was good all day. I could pretty much drive it where I needed to. I was wanting this win on the 1/3-mile, I just needed to close the deal.”

After the event, Secord was thankful for those who have turned his program around over the last several seasons.

“I gotta thank Jeff Schrader”, Secord began. “About two years ago we turned around and fixed this sucker, and ever since then it hasn’t finished worse than fifth. I think we are averaging about two. I gotta thank Pinnacle Peak Steakhouse San Dimas, KH Enterprises, Eddie Secord Motorsports, LES, Total Power, Dean Kuhn along with Mike Naake and Steve Teets, who both did the shocks. Man, this thing was on a rail!”

Doss fell to second in the championship standings and knows the team will need to work even harder over the next three events. He felt the difference between the two drivers in this event, may have come down to the motor combination.

“I think it just came down to the motor he had versus us”, Doss speculated. “The 602 just naturally saves tires, and I was having to roll the egg the whole time. I gotta hand it off to Duane Sharp, Steve Teets, Eddie Wilcox and everyone who’s on-board with this deal. They worked their butts off. I don’t think we are the points leader anymore, so we’ve got some work to do.”

Third-place finisher Travis McCullough was happy with his finish, but will be looking to make improvements before the next event.

“I spent a lot of time on iRacing, trying to learn this 1/3-mile, and it helped out. Tonight, we suffered a little bit, and it was back to me. It came down to longevity. I gotta workout and get in a little better shape to keep up with these fast guys up front. I had a fun time racing with Jeremy Doss. He is a helluva driver, and he paid me back after I give it back to him. He rattled my cage good and got the position.”

The next event on the SPEARS Modified Series schedule is at Kern County Raceway on October 25th. Secord will bring a four-point lead into Round #6 of the schedule with Doss second, McCullough third, and William Guevara now fourth in the championship standings. Jim Coffey rounds out the top-five, and maintains his lead in the Rookie-of-the-Year battle.